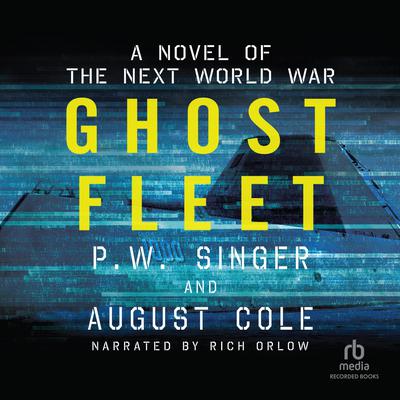 Ghost Fleet: A Novel of the Next World War

The year is 2026. China has taken over as the world's largest economy, while the United States, mired in an oil shortage, struggles to adjust to its diminished role. Then, a surprise attack throws the U.S. into a chaos unseen since Pearl Harbor. As the enemy takes control, the survival of the nation will depend upon the most unlikely forces: the Navy's antiquated Ghost Fleet and a cadre of homegrown terrorists. Ghost Fleet is unique in that every piece of technology featured in the novel already exists or is in the works. Peter W. Singer is Senior Fellow and Director of the 21st Century Defense Initiative at the Brookings Institution and a consultant for the US Department of Defense and FBI. August Cole is a journalist and writer specializing in national security issues and is an Adjunct Fellow at the American Security Project.

“If you’ve been looking for a smart update to Tom Clancy, this is for you.” —Foreign Policy
“A ripped from the headlines novel about war that’s just around the corner…Exciting.” —BuzzFeed

P. W. Singer, a senior fellow at the Brookings Institution, has worked in the Pentagon and consulted for the departments of Defense and State, the CIA, and Congress. The author of several books, he has also written for such publications as the New York Times and Foreign Affairs.

August Cole is a writer and analyst specializing in national security issues, and a former defense industry reporter for the Wall Street Journal.