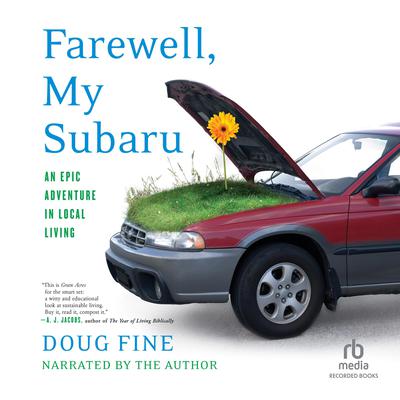 Farewell, My Subaru: One Man's Search for Happiness Living Green Off the Grid

Like many Americans, Doug Fine enjoys his creature comforts, but he also knows full well they keep him addicted to oil. So he wonders: Is it possible to keep his Netflix and his car, his Wi-Fi and his subwoofers, and still reduce his carbon footprint? In an attempt to find out, Fine up and moves to a remote ranch in New Mexico, where he brazenly vows to grow his own food, use sunlight to power his world, and drive on restaurant grease. Never mind that he's never raised so much as a chicken or a bean. Or that he has no mechanical or electrical skills. Whether installing Japanese solar panels, defending the goats he found on Craigslist against coyotes, or co-opting waste oil from the local Chinese restaurant to try and fill the new "veggie oil" tank in his ROAT (short for Ridiculously Oversized American Truck), Fine's extraordinary undertaking makes one thing clear: It ain't easy being green. In fact, his journey uncovers a slew of surprising facts about alternative energy, organic and locally grown food, and climate change. Both a hilarious romp and an inspiring call to action, Farewell, My Subaru makes a profound statement about trading today's instant gratifications for a deeper, more enduring kind of satisfaction.

Doug Fine, a contributor to NPR and Public Radio International, has reported from remote perches in Burma, Rwanda, Laos, Guatemala, and Tajikistan. He is the author of Not Really an Alaskan Mountain Man, and lives in southern New Mexico.