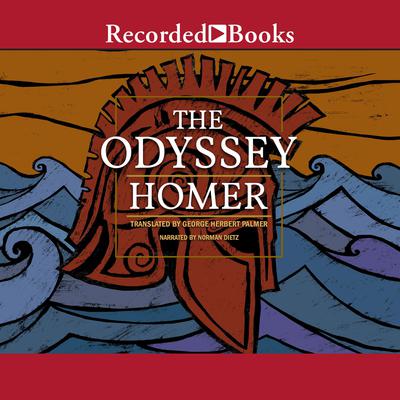 By Homer
Read by Norman Dietz

The adventures of Odysseus have stood in the center of classical literature for centuries. Although countless scholars have studied and translated Homer's epic poem, each person who encounters The Odyssey for the first time is unfailingly startled by the excitement, drama, and contemporary nature of its remarkable hero. The Odyssey is the sweeping story of a great warrior who must wander the world for years after the Trojan War. But it is also an intensely domestic tale of the loving husband who returns after a long absence, joining forces with his faithful wife to defeat those who would destroy their enduring union. Little is known of Homer's life, but this much is certain: he sang for a living. Long before The Odyssey appeared on the page, it was recited over and over to listeners eager to be entertained. Prepare now to be drawn into a vivid ancient world where the voyages of Odysseus and his fight to regain his rightful place at home stand out with stunning clarity in this lyrical narration by Norman Dietz.

Homer (9th or 8th century BC) is the presumed author of the Iliad and the Odyssey, the two greatest epic poems of ancient Greece. Virtually nothing is known about his life. Tradition has it that he was blind. Most scholars believe he composed the Iliad and the Odyssey by relying on oral traditions. Their value lies chiefly in the poetry itself, moving from sublime passages about the gods and heroic exploits to passages expressing deep human emotion.