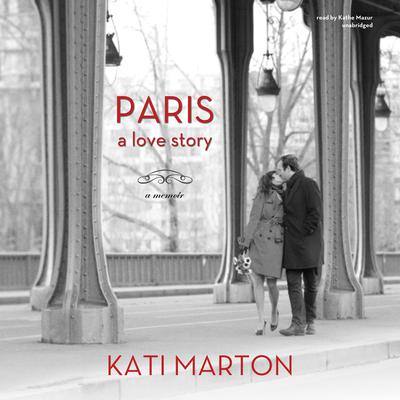 In this remarkably honest memoir, award-winning journalist and distinguished author Kati Marton presents an impassioned and romantic story of love, loss, and life after loss. Paris is at the heart of this deeply moving account. At every stage of her life, Paris offers Marton beauty and excitement, and now, after the sudden death of her husband, Richard Holbrooke, it offers a chance for a fresh beginning.

With intimate and nuanced portraits of Peter Jennings, the man to whom she was married for fifteen years and with whom she had two children, and Richard, with whom she found enduring love, Marton paints a vivid account of an adventuresome life in the stream of history. Inspirational and deeply human,Paris: A Love Storywill touch every generation.

"[A] must-read…enthralling.” —Vogue
“Kati Marton has lived a thrilling life…She has been an eyewitness to history in all its cruelty…A brisk and sometimes delicious read.” —Washington Post
“Kati Marton is trying to create a future by recapturing the past…She pulls it off with a certain amount of flair and élan…There are lots of things to like about Paris: A Love Story.” —Washington Times
“Kati Marton is a writer of great clarity and grace. Paris: A Love Story is…a memorable story of love, loss, and landscape that is as expansive as her remarkable life.” —Steve Coll, Pulitzer Prize–winning author
“Kati Marton has written movingly about her love, loss, and the healing power of an elegant city. She takes readers on a journey, as she writes, to find a place where there is joy in remembered joy.” —Diane Sawyer, television journalist
“It is wonderful—touching, romantic, and honest—and oh, how it made me want to go to Paris!” —Barbara Walters, television journalist and New York Times bestselling author
“A great read—the lightness of love, the drama of war and sudden death—with Paris in the background.” —Diane von Furstenberg
“Marton offers an intimate look at her adventurous life in a book that is part romance, part travelogue, and part memoir of journalism and diplomacy.” —Booklist
“Paris provides a backdrop for this absorbing memoir of love and painful loss, played out on the larger stage of world politics…On a first-name basis with the political movers and shakers on a global stage, Marton has observed world politics in the making and makes space for readers on her catbird seat.”  —Kirkus Reviews
“Kathe Mazur’s narration is characterized by a sincere tone and slow pace in this memoir…The book’s many French words and names are no challenge for Mazur as she zips through them without hesitation, lending authenticity to the production.” —AudioFile

Kati Marton is the author of several acclaimed nonfiction books, including My Family’s Journey to America, a National Book Critics Circle Award finalist. She is an award-winning former NPR and ABC News correspondent.