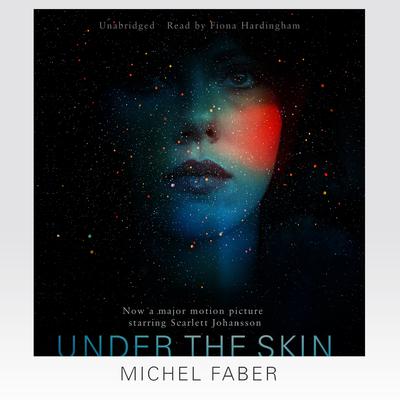 Hailed as "original and unsettling, an Animal Farm for the new century" (Wall Street Journal), this debut novel lingers long after the last page has been turned.

At once humane and horrifying, Under the Skin takes us on a heart-thumping ride through dangerous territory: our own moral instincts and the boundaries of compassion. A grotesque and comical allegory and a surreal representation of contemporary society run amok, Under the Skin was internationally received as the arrival of an exciting talent, rich and assured.

“A wonderful book—painful, lyrical, frightening, brilliant…I couldn’t put it down.” —Kate Atkinson, New York Times bestselling author
“The fantastic is so nicely played against the day-to-day that one feels the strangeness of both.” —New York Times Book Review
“Faber constructs a compelling, unusual tale about species difference and the limits of compassion. Under the Skin blends elements of science fiction, grotesque comedy, horror, and thriller into a genre-jumping meditation.” —Washington Post Book World
“Original and unsettling, an Animal Farm for the new century…Michel Faber is a strong, moral voice, and this first novel promises great things for the future.” —Wall Street Journal
“A ride deep into a misanthropic hinterland.” —Los Angeles Times Book Review
“A satiric novel eerie and touching in equal parts…Under the Skin sits squarely within the tradition of the British satire, and one is bound to recall the features of Swift’s boorish Yahoos…and peaceful Eloi of H. G. Wells’ dark, technological century’s-end fantasy, The Time Machine.” —San Francisco Chronicle
“A fascinating psychological thriller…[that] hovers between the real and the fantastic.” —Baltimore Sun
“An extraordinary book that touches on the most profound issues of the human condition.” —Times (London)
“A coolly imaginative and shocking novel.” —Times Literary Supplement (London)
“[Under the Skin] uses devices borrowed from the suspense-thriller and science fiction genres to create a vivid portrait of a world that is both wildly improbable and frighteningly real.” —Globe and Mail (Toronto)
“A fantastic first novel, a great first novel, so intelligently and beautifully made a book as to deserve a wide readership.” —Boston Book Review
“Notwithstanding the clever characterization, the real triumph is Faber’s prose. This is a man who could give Conrad a run at writing the perfect sentence.” —Guardian (London)
“[A] riveting horror novel…Perfectly chilling.” —Mademoiselle
“Under the Skin is a compulsive read and remains a lyrical and disturbing allegorical meditation on human appetites, morality, and essence.” —Independent (London)
“Profound and disturbing.” —Sunday Times (London)
“Alternately gorgeous and terrifying, lyrical and brutal, Under the Skin compels and teases…A growing need to turn the pages sneaks up on you…So satisfying and successful.” —Newsday
“Faber’s pacing here is masterful, with clues precisely dropped and details ominously described…The Dutch-born and Australian-raised Faber is a strange and promising new talent.” —Publishers Weekly
“As suspenseful and creepy as the first third of Psycho. An artful moral parable…in the mode of Brave New World and Animal Farm.” —Booklist (starred review)
“A wildly imaginative, scorching, bizarre, and insidious first novel.” —BookPage
“An eerie debut novel, turns the Scottish Highlands into a landscape from The Twilight Zone…Highly compelling, enhanced by the superbly evoked imagery of the Highlands.” —Kirkus Reviews

Michel Faber’s work has been published in twenty countries and has received several literary awards. He is the author of The Crimson Petal and the White, a New York Times bestseller, and Under the Skin, which was shortlisted for the Whitbread award.