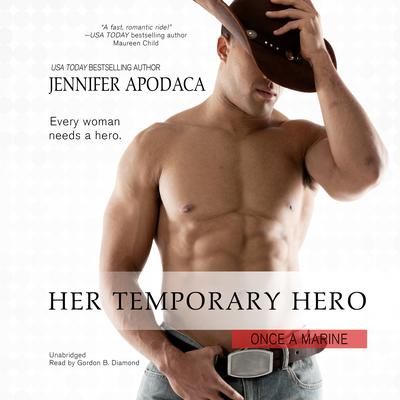 By Jennifer Apodaca
Read by Gordon B. Diamond

The Once a Marine Series: Book 2

Logan Knight’s last mission as a Marine left him with more than one kind of scar and a dream of helping other veterans dealing with the same pain. He has the money. He has a plan. Now, he just needs his portion of the family’s property. But, years ago, his father made him sign an agreement that the land is only his if he’s married by thirty. With just a few months until his birthday, Logan needs a temporary wife.

Becky Holmes and her baby are barely scraping by, on the run from her ex. She’ll do whatever it takes to protect her child. When the wealthy, sexy, emotionally haunted Logan offers a solution, it seems like it just may be her only option. It doesn’t hurt that he’s kind and makes her feel wanted in a way she never has.

As they spend more days—and nights—together, Logan wants to make their relationship real. But his attempt to have it all backfires into a betrayal that forces Becky into a heart-wrenching choice no woman should ever have to make.

“Her Temporary Hero is a fast, romantic ride through betrayal and the love that can change everything. Jennifer Apodaca is a guaranteed great read!” —Maureen Child, USA Today bestselling author

USA Today bestselling author Jennifer Apodaca has written a fun and sexy mystery series, and a variety of contemporary romances. Under the pen name of Jennifer Lyon, she also created a dark, sizzling paranormal series, and most recently, the Plus One Chronicles—an emotional and sexy adult contemporary series.