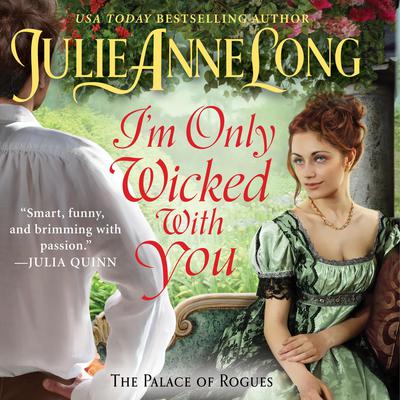 I'm Only Wicked with You

The Palace of Rogues Series: Book 3

USA Today bestselling author Julie Anne Long continues her Palace of Rogues series with a brand-new romance about an ambitious American and a headstrong British heiress.

He’s the battle-hardened son of a bastard, raised in the wilds of New York. She’s the sheltered, blue-blooded darling of the London broadsheets, destined to marry a duke. Their worlds could only collide in a boardinghouse by the London docks...and when they do, the sparks would ignite all of England.

Nothing can stop Hugh Cassidy’s drive to build an American empire...unless it’s his new nemesis, the arrogant, beautiful, too-clever-by-half Lady Lillias Vaughn. The fascination is mutual. The temptation is merciless. And the inevitable indiscretion? Soul-searing—and the ruination of them both. Hugh’s proposal salvages Lillias’s honor but kills their dreams for their futures...until they arrive at a plan that could honorably set them free.

Julie Anne Long is the USA Today bestselling author of romance and historical novels. NPR named her Pennyroyal Green series as one of the Top 100 romance series of all time. Her books have frequently topped reader and critic’s polls and have been nominated for numerous awards, including the RITA, Romantic Times Reviewer’s Choice, and the Quill.