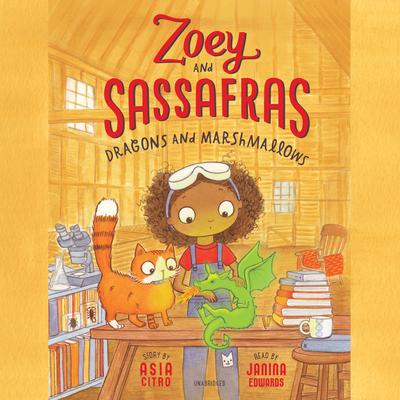 Zoey and Sassafras: Dragons and Marshmallows

The Zoey and Sassafras Series: Book 1

With magical animals, science, mystery, and adventure—the brand new Zoey and Sassafras series has something for everyone! Easy-to-read language makes this series perfect for a wide range of ages.

In the first audiobook of this series, Zoey discovers a glowing photo and learns an amazing secret. Injured magical animals come to their backyard barn for help! When a sick baby dragon appears, it’s up to Zoey and Sassafras to figure out what’s wrong. Will they be able to help little Marshmallow before it’s too late?

Each story in the Zoey and Sassafras series features a new magical animal with a problem that must be solved using science. There isn’t a set formula for each book; Zoey sometimes needs to run experiments, while other times she needs to investigate a mystery, and yet other times she needs to do research. Zoey models how to keep a science journal through her handwritten entries in each story. Each story is complete with a glossary of the kid-friendly definitions for scientific terms used. The series highlights child-led inquiry science and the topics covered align with both Common Core and Next Generation Science Standards.

“Concepts are explained concisely and clearly…[Dragons and Marshmallows] deserves a place in all libraries serving young readers.” —School Library Journal
“Citro gracefully balances her story’s scientific and fantasy elements.” —Publishers Weekly
“The imaginative premise and the incorporation of STEM elements make this an attractive and engaging choice.” —Booklist
“Tales for young audiences that model the scientific method are nice to see.” —Kirkus Reviews