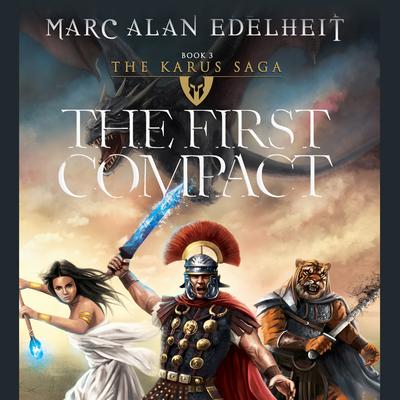 Having been transported to the world of Tanis, separated from everything they know, the Ninth find themselves caught amid an ancient war of the gods. Like a dark tide, the Horde is slowly conquering one nation after another, and a great migration of peoples has begun fleeing westward before the enemy's advancing armies. No one has been able to stand against the might of the Horde. But the Horde has never faced the power of a Roman legion.

Cast adrift in this strange, fantastical world, so unlike the one he knew, Karus has been given a number of tasks by his God Jupiter, known in this world as the High Father. Karus' holy mission and mandate: retrieve a dread artifact and form an alliance with the peoples of this world so together they can withstand the might of the enemy and finally escape Tanis before it is too late. If he succeeds, the reward is everything Romulus and Remus were promised. If he fails, all will be lost and the Ninth destroyed.

Aided by the dragons Cyln'Phax and Kordem and the dwarven warchief Shoega, Karus and Amarra have succeeded in the first task, retrieving the dread sword Rarokan. It is a weapon that is both powerful and incredibly dangerous, for it has a mind of its own and an evil agenda.

Returning from the Fortress of Radiance, Karus must now find a way to save Shoega's besieged warband, cure the sickness ravaging his legion, and then defeat an enemy army that outnumbers his legion greatly before he can even begin to think about unifying the free peoples of Tanis, who dislike and despise one another.

If you enjoy an original story, honorable heroes, mind-blowing twists, and pause-resisting action that puts you right in the middle of gritty battles, then you will love the Karus Saga.