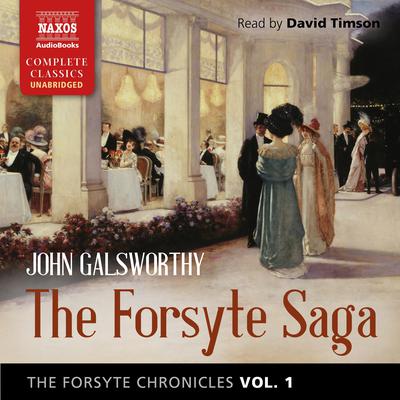 John Galsworthy’s magnificent trilogy of power and passion chronicles the wealthy Forsyte family. As the disintegrating values of the Victorian era progress to World War I and the political uncertainty of the 1930s, the family’s material and emotional struggles are set within the dwindling status of the affluent middle-classes. Infused with warmth, compassion and engaging characters, the complete Chronicles are divided into three volumes, containing nine books and four interludes in total. In Volume 1, The Forsyte Saga, Soames Forsyte – the ‘man of property’ – is desperate to uphold values and conventions that are becoming out of step with the time. His most prized possession is his strikingly beautiful wife Irene, but she is profoundly unhappy; the bitterness only builds, and the events that follow are set to ripple through the next generation of Forsytes. The Forsyte Saga contains Book 1: The Man of Property, Interlude: Indian Summer of a Forsyte, Book 2: In Chancery, Interlude: Awakening and Book 3: To Let.