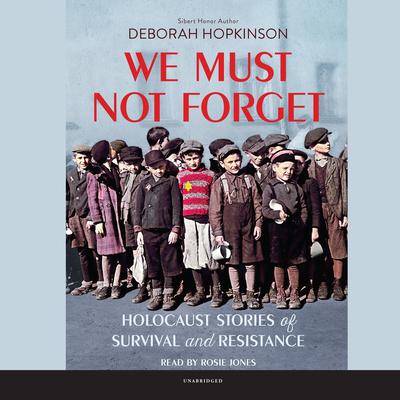 We Must Not Forget: Holocaust Stories of Survival and Resistance

Sibert Honor author Deborah Hopkinson unearths the heroic stories of Jewish survivors from different countries so that we may never forget the past.

As World War II raged, millions of young Jewish people were caught up in the horrors of the Nazis' Final Solution. Many readers know of Adolf Hitler and the Nazi state's genocidal campaign against European Jews and others of so-called "inferior" races. Yet so many of the individual stories remain buried in time. Of those who endured the Holocaust, some were caught by the Nazis and sent to concentration camps, some hid right under Hitler's nose, some were separated from their parents, some chose to fight back. Against all odds, some survived. They all have stories that must be told. They all have stories we must keep safe in our collective memory.

In this thoroughly researched and passionately written narrative nonfiction for upper middle-grade readers, critically acclaimed author Deborah Hopkinson allows the voices of Holocaust survivors to live on the page, recalling their persecution, survival, and resistance. Focusing on testimonies from across Germany, the Netherlands, France, and Poland, Hopkinson paints a moving and diverse portrait of the Jewish youth experience in Europe under the shadow of the Third Reich. With archival images and myriad interviews, this compelling and beautifully told addition to Holocaust history not only honors the courage of the victims, but calls young readers to action -- by reminding them that heroism begins with the ordinary, everyday feat of showing compassion toward our fellow citizens.