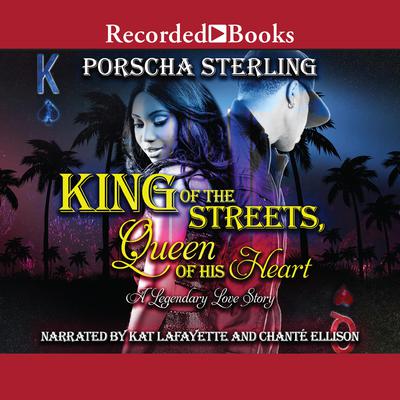 King of the Streets, Queen of His Heart: A Legendary Love Story

By Porscha Sterling
Read by Chante Ellison  and Kat Lafayette

The King of the Streets, Queen of His Heart Series: Book 1

When 21-year-old college student, Shanecia Jones came home from college, her entire world was turned upside down when she found her mother in the bedroom, nearly dead from a drug overdose. Always eager to be the one to set things right for the people she loved, she decided, against the urgings of her cousin, Maliah, to confront the leader of the new gang in Liberty City who is responsible for serving her mother's addiction. But once she meets Legend, her life really begins to change. Legend, the unofficial leader of a group of brothers known as the D Boys because of their last name, is not only the youngest of the crew, he is the most savage of them all which is how he got his name. After being confronted by Shanecia, he decided to spare her life and let her leave but, for some reason he can't explain, he is unable to keep her out of his mind and eventually decided he had to make her his. But when he finds out that Shanecia is connected with his enemy in more ways than one, it makes him question how loyal a love they could really have. Shanecia's cousin, Maliah, is in love with Danny, the father of her children and her first love whom she has been with since high school but there is just one problem: Danny, who was once a highly paid street hustler, is now addicted to the very drugs he'd sold to others and he owes a very large debt to Mello, the head of the crew Danny is apart of, who also happens to be Legend's #1 enemy. In order to get back the money Danny owes and to take care of her three children, Maliah starts dancing at a strip club which is where she meets Murk, Legend's brother. When she starts to fall for one of the D Boys while still officially in a relationship with Danny who works for the opposing gang, it puts her in the middle of a street war that she is not sure she wants to take part in. Will she side with her heart, that is pointing her towards Murk or will she stick with the first man she's ever loved and help turn him back into the man he once was? The streets of Miami are savage and ruthless but they are nothing in comparison to what happens when love is thrown into the equation. Will love prevail or will the streets reign supreme over all? Find out in this legendary love story.