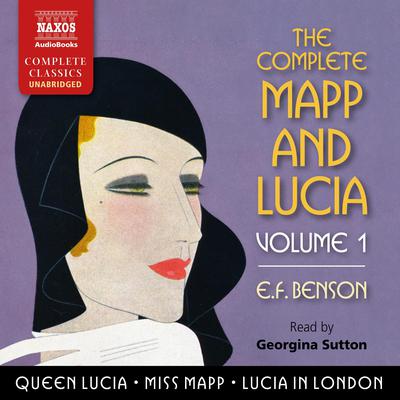 The Complete Mapp and Lucia, Vol. 1

The Mapp and Lucia Series

Sharply observant and wickedly funny, E.F. Benson’s six ‘Mapp and Lucia’ novels satirize the upper-middle-class social climbers in 1920s and ’30s rural England. Games of bridge and cups of tea fuel hilarious gossip and vindictive plots a-plenty. It is a masterfully sustained spotlight on the minutiae of village life – a clever and ultimately heart-warming series that seems tailor-made for audio. Volume 1 contains the first three books. Book One: Queen Lucia: Imposing herself as social arbiter of Riseholme, a small village in the Cotswolds, Mrs Lucas insists on the Italianate title of ‘Queen Lucia’ even though her Italian is non-existent. As queen bee – flawlessly snobbish and overbearing – she rules over her unfortunate neighbours. Could her position be threatened by the arrival of Olga the opera singer? Book Two: Miss Mapp: With a face ‘corrugated by chronic rage and curiosity’, Miss Mapp rules the village of Tilling as Lucia rules Riseholme. At the centre of the social jostling, she is kept alert and alive by anger and suspicion of every other resident, among whom are Diva Plaistow, Captain Puffin and Mrs Poppet. Book Three: Lucia in London: Can Lucia be queen of town and country? When Emmeline and Philip (Lucia and Peppino) inherit a house in London, Lucia moves into a new gear as she climbs the city’s social ladder. It’s time for Riseholme residents, feeling slighted by her desertion, to prove they can manage without her.

Edward Frederic Benson (1867–1940) was born in Berkshire, England, and educated at Cambridge. He worked in Athens for the British School of Archaeology and later in Egypt for the Society for the Promotion of Hellenic Studies. Benson wrote fiction, reminiscences, and biographies, but is best remembered for his arch satirical novels and his urbane autobiographical studies of Edwardian and Georgian society.