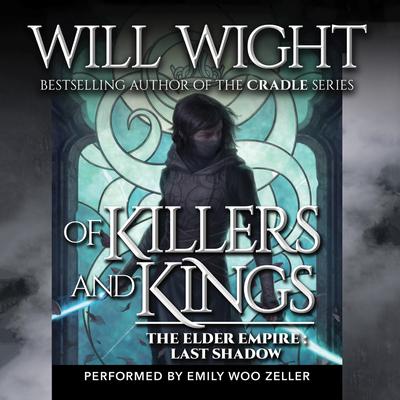 Of Killers and Kings

By Will Wight
Read by Emily Woo Zeller

The stories of the Elder Empire are told in a unique way.

If you've already listened to the other companion novels in the Elder Empire, then you know how this works. If not, you may wish to seek out those books for an explanation of how these parallel stories interact. Once you're ready to proceed, here's a glimpse of the road ahead....

Shera, the new Head of the Consultant's Guild, faces more responsibility than she ever asked for. The Guilds are in a state of open war, her Consultants have been forced to relocate from their ancestral home, and Elder cultists plague the streets.

In their tombs, the Great Elders stir.

With the sky cracked and more Elders rising than ever before, Shera and her faction of Independent Guilds seek a truce with their Imperialist opponents.

But they know that any alliance is a gamble. The Imperialists have appointed Calder Marten to the throne, and history has proven that a single ruler is vulnerable to Elder corruption.

Even so, Shera and her allies want to bring the division to an end...if the enemy Guilds are willing to cooperate.

And if Calder hasn't been corrupted already.

On the seas, a man clings to his own power.

In the shadows, a woman fights for peace.