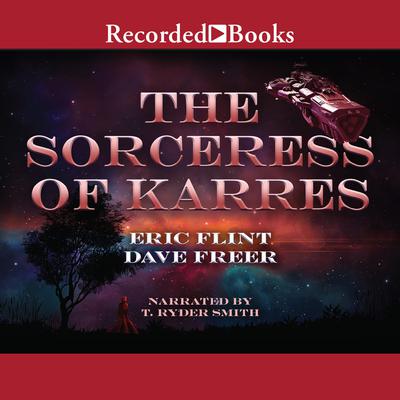 The Sorceress of Karres

By Eric Flint  and Dave Freer

The Witches of Karres Series: Book 3

A New Sequel to The Witches of Karres. Two Top Writers Continue the Bewitching Adventures Begun in One of Science Fiction’s Most Beloved Novels.

As Captain Pausert had often had occasion to observe, life just wasn’t fair! Hadn’t he (with the help of the notorious witches of Karres, of course) outmaneuvered the deadliest of space pirates and eliminated the threat of the Worm World (as told in The Witches of Karres), after which, at the least, he deserved some time off. No such luck, though, as the Empress herself sent him on a secret mission to stop the nanite plague, but an enemy had somehow convinced the Imperial Fleet that he was actually a wanted criminal, so after a battle leaving his ship in urgent need of repairs all three of them joined an interstellar traveling circus (don’t ask!) in order to save the galaxy once again (as told in The Wizard of Karres).

Time for a vacation? Don’t be ridiculous—there’s a new urgent mission that has Captain Pausert’s name on it! This new novel finds the long-suffering Captain and the two young Karres witches—Goth, who vows she will marry him when she grows up, and her younger sister The Leewit—being sent off to investigate mysterious and ominous events in the notorious Chaladoor region of space. Goth soon becomes aware that unknown but surely inimical forces are tracking them, and in order to foil them she takes a desperate route to travel back in time and meet Pausert as a young boy. Meanwhile, the Captain and the Leewit find themselves in the middle of their own desperate situation in the Chaladoor.

Whoever it was who said that a change was as good as a vacation never met any of the Witches of Karres—nor experienced their amazing talent for getting Captain Pausert into trouble.