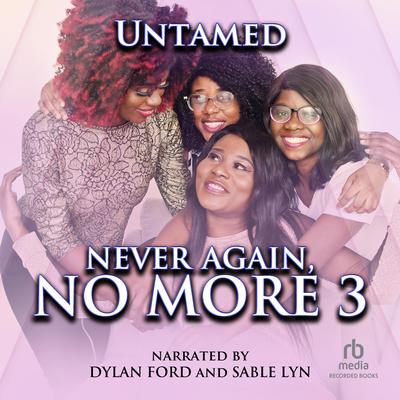 By Untamed
Read by Sable Lyn  and Dylan Ford

In part 3 of the Never AgainNo More series, Trinity, LaMeka, Lucinda and Charice are back with brand new drama. Although they seem to have escaped their pasts, they find out they can never say never again. Trinity living the high life and loving it as a wife, a mother, a student and a career woman. But she has a past. A past namedPoochAfter barely escaping the death grip Tony had over her, LaMekas life is truly coming full circle, but her sordid past is not that far of a distant memory but then again neither is TonyWeathering storms is one battle Lucinda is used to, but after she falls in love with Aldris, his past gets U.S. mailed to their front doorstep, she finds out weathering the storm isnt the problemits surviving itAfter the loss of Charity, Charice and Ryan moved ontogether. It is a marriage of pure love and pure bliss until Lincoln shows up at their door determined to prove that it is a marriage of pure lies. Slowly but surely this twisted game of cat and mouse begins to unravel and proves no one is as they seem. As the follow-up to Never AgainNo More II, this book explodes on secrets and lies that begin unraveling from one character to the next and showcases what goes aroundtruly comes around again.

Untamed is an author best known for her gritty yet flavorful language through real-life, every day stories with highly animated and lifelike characters. Her work has been featured in several print ads, and she has been interviewed on NTUNED Radio Show, the Poetic Soul Talk Show, and PD Radio. In 2015, she released a poetry book entitled This Side of Heaven; A Poetic Journey of Strength and Survival for which all proceeds are donated to M.A.D.D. (Mothers Against Drunk Driving).