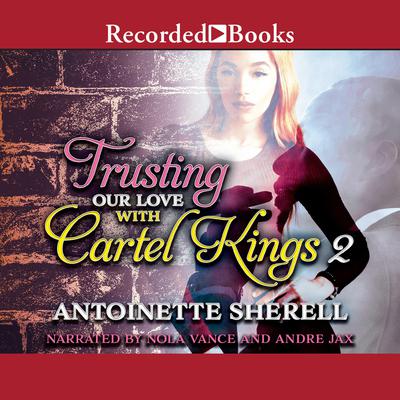 Trusting Our Love with Cartel Kings 2

The Trusting Our Love With Cartel Kings Series: Book 2

The King brothers are blindsided when a mysterious envelope brings forth secrets they knew nothing about. Once the truth is brought to light, they’re left having to find a way to keep their family from falling apart.

In a fresh relationship with Raven, Deuce is having a hard time balancing his family and love life—wanting to protect her while still worrying about his brothers’ dilemmas. Will he be able to handle the pressure of saving everyone, or will his juggling of their issues cause him to unintentionally push Raven into the arms of someone else?

Saint is stuck in an engagement he no longer wants to be in. After his fiancée, Abigail, confesses to knowing about Lovely, she gives him an ultimatum he has no choice but to accept. Once he realizes she’s always two steps ahead of him, he’s forced to push Lovely away … but for how long?

Silesia has been playing a dangerous game with Ace and her boyfriend, Rion. When her secrets are spilled, and both find out what she’s been up to, she finds herself in danger of the very person she thought would protect her. When her savior becomes her enemy, will she make it out unscathed?

Tre is breezing through life with no worries or woman problems. However, one spontaneous night with Asteria changes things. When an unconventional friendship is formed, it leads to much more than either could fathom.

With families full of secrets, relationships full of gray areas, and hearts low on trust, things are bound to go awry. Will the King men be able to secure their futures with these four strong women, or will outside forces and snakes in the grass have the upper hand?