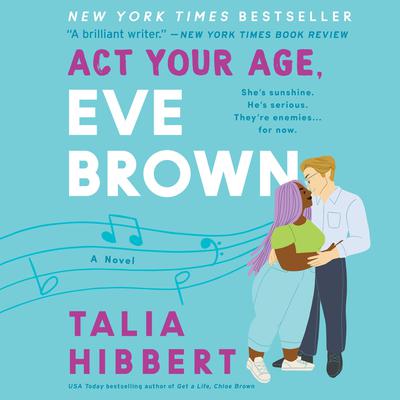 An Oprah Magazine Pick of Most Anticipated Romances of 2021

A Marie Claire Magazine Pick of Best New Romances of 2021

In USA Today bestselling author Talia Hibbert’s third novel in the Brown Sisters romantic comedy series, the flightiest Brown sister crashes into the life of an uptight B&B owner and has him falling hard—literally.

Eve Brown is a certified hot mess. No matter how hard she strives to do right, her life always goes horribly wrong. So she’s given up trying. But when her personal brand of chaos ruins an expensive wedding (someone had to liberate those poor doves), her parents draw the line. It’s time for Eve to grow up and prove herself—even though she’s not entirely sure how.

Jacob Wayne is in control. Always. The bed and breakfast owner’s on a mission to dominate the hospitality industry and he expects nothing less than perfection. So when a purple-haired tornado of a woman turns up out of the blue to interview for his open chef position, he tells her the brutal truth: not a chance in hell. Then she hits him with her car—supposedly by accident. Yeah, right.

Now his arm is broken, his B&B is understaffed, and the dangerously unpredictable Eve is fluttering around, trying to help. Before long, she’s infiltrated his work, his kitchen—and his spare bedroom. Jacob hates everything about it. Or rather, he should. Sunny, chaotic Eve is his natural-born nemesis, but the longer these two enemies spend in close quarters, the more their animosity turns into something else. Like Eve, the heat between them is impossible to ignore—and it’s melting Jacob’s frosty exterior.

“A happily ever after for the third Brown sister…Hibbert explores themes of self-discovery and belonging with her trademark humor and sensitivity, providing plenty of heat as her characters begin to understand each other.” —Library Journal (starred review)
“Their biting banter and saucy looks will delight readers who enjoy a good enemies-to-lovers tale that doesn’t shy away from epic sex scenes or raw emotions.” —Booklist (starred review)

Talia Hibbert is a Black British author whose novels have made the bestsellers list of the Wall Street Journal and USA Today. She writes sexy, diverse romance because she believes that people of marginalized identities need honest and positive representation.