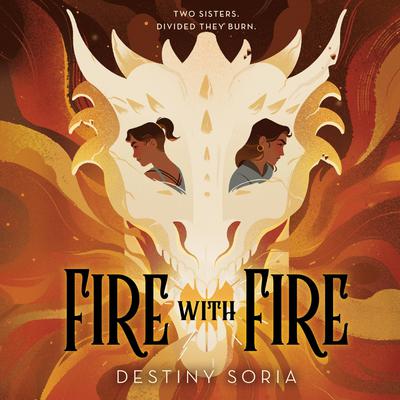 Raised to be fierce dragon slayers, two sisters end up on opposite sides of the impending war when one sister forms an unlikely, magical bond with a dragon in this standalone YA contemporary fantasy that's perfect for fans of Slayer and Sorcery of Thorns.

Dani and Eden Rivera were both born to kill dragons, but the sisters couldn't be more different. For Dani, dragon slaying takes a back seat to normal high school life, while Eden prioritizes training above everything else. Yet they both agree on one thing: it's kill or be killed where dragons are concerned.

Until Dani comes face-to-face with one and forges a rare and magical bond with him. As she gets to know Nox, she realizes that everything she thought she knew about dragons is wrong. With Dani lost to the dragons, Eden turns to mysterious and alluring sorcerers to help save her sister. Now on opposite sides of the conflict, each sister will do whatever it takes to save the other. But the two are playing with magic that is more dangerous than they know, and there is another, more powerful enemy waiting for them both in the shadows.

Every Destiny Soria book is a gem, and this one is certainly the most fiery. —Buzzfeed   “[An] exciting, inclusive fantasy with a dash of romance.... Hits all the marks for an absorbing and high-spirited read.”—Kirkus   “A gripping tale filled with incredible metaphors, fitting pop culture references, and hilarious punchlines

Destiny Soria lives and works in the shadow of the mighty Vulcan statue in Birmingham, Alabama. Her first book, Iron Cast, was published in 2016 to critical acclaim. Find her at www.destinysoria.com. Twitter and Instagram: @thedestinysoria. Facebook: @dlsoria.