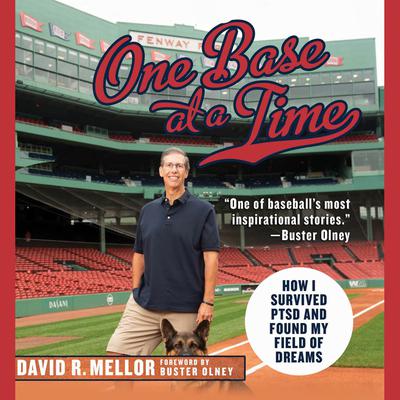 One Base at a Time: How I Survived PTSD and Found My Field of Dreams

“Dave Mellor has built one of baseball's most inspirational stories over the last half-century. Anchored by a love for his family and the game, he survived incomprehensible catastrophes and PTSD to become a pioneering ballfield artist and head groundskeeper for Fenway Park.” (Buster Olney, ESPN)

On July 10, 1981, David Mellor was just a baseball-crazed kid, a star high school pitcher preparing to go to college and dreaming of one day taking the mound in Fenway Park for his beloved Boston Red Sox. His dream was derailed as he crossed the parking lot of a McDonald's. He heard the racing engine, but couldn't defend himself against the car coming straight at him. It sent him flying through the air and into a wall, where it hit him again and pinned him, severely damaging his knee and destroying his hope of ever being a Major League pitcher.

In the wake of the accident, even as he reached the major leagues as a groundskeeper, David was tortured by the aftermath of his injuries and additional traumas, including being struck by a car again, this time in the outfield of Milwaukee's County Stadium while he was working on overhauling the field for the Milwaukee Brewers. He suffered terribly from anxiety, nightmares, and flashbacks, completely unaware that he was experiencing the debilitating symptoms of Post-Traumatic Stress Disorder, commonly known as PTSD.

One Base at a Time recounts in vivid detail his subsequent 29-year struggle with PTSD. This harrowing but inspiring story documents the remarkable journey of a man debilitated by physical and psychological injuries who refused to give up even when everything seemed hopeless. After a fortuitous event, he admitted to needing help, sought effective treatment, and turned his life around. It's a powerful, helpful outline of the steps one needs to take to overcome the powerful hold PTSD has on one's life.

One Base at a Time is a must-listen for anyone suffering in silence or anyone who knows someone suffering in the wake of severe traumatic events. Those who seem broken can be fixed and live a happy, fulfilling life.

"Dave is a truly unique person. His passion, hard work, creativity, and love for baseball gives life to Fenway Park. It gives intensity to us as ball players and pushes us to put on a show night after night. Dave is as much a part of the Red Sox team as anyone and his life and the adversity he has overcome is really inspiring." (David "Big Papi" Ortiz)