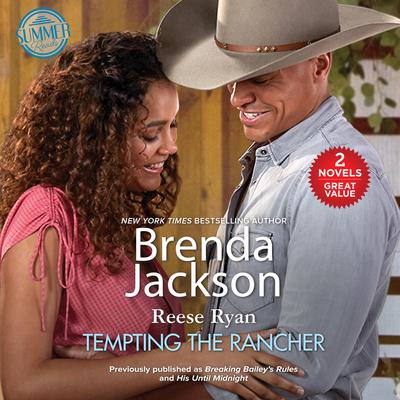 Tempting the Rancher: Featuring: Breaking Bailey’s Rules and His Until Midnight

Dial up the passion with these hot summer reads!

Rule number one for Bailey Westmoreland: Never fall for a man who would take her away from her tight-knit family’s Colorado home. So why is she following rancher Walker Rafferty all the way to Alaska? Bailey tells herself she owes the sexy loner an apology, and once she gets there, it’s only right to stay and help him when he’s injured … isn’t it?

His Until Midnight by Reese Ryan

When Tessa Noble takes the stage at a charity auction after a sexy makeover, her best friend, Ryan Bateman, must place the winning bid. It’s definitely not because he’s jealous. Their weekend getaway is a ploy for positive press … or so the rancher tells himself. But soon things take an unexpected turn from platonic to passionate, catapulting the couple far beyond the friend zone …

Reese Ryan writes sexy, contemporary romance featuring a diverse cast of complex characters. Past president of her local RWA chapter and a panelist at the 2017 Los Angeles Times Festival of Books, Reese is an advocate of the romance genre and diversity in fiction.