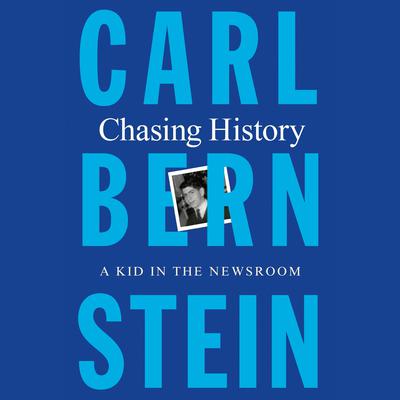 Chasing History: A Kid in the Newsroom

In this triumphant memoir, Carl Bernstein, the Pulitzer Prize-winning coauthor of All the President’s Men and pioneer of investigative journalism, recalls his beginnings as an audacious teenage newspaper reporter in the nation’s capital―a winning tale of scrapes, gumshoeing, and American bedlam.

In 1960, Bernstein was just a sixteen-year-old at considerable risk of failing to graduate high school. Inquisitive, self-taught―and, yes, truant―Bernstein landed a job as a copyboy at the Evening Star, the afternoon paper in Washington. By nineteen, he was a reporter there.

In Chasing History, Bernstein recalls the origins of his storied journalistic career as he chronicles the Kennedy era, the swelling civil rights movement, and a slew of grisly crimes. He spins a buoyant, frenetic account of educating himself in what Bob Woodward describes as “the genius of perpetual engagement.”

Funny and exhilarating, poignant and frank, Chasing History is an extraordinary memoir of life on the cusp of adulthood for a determined young man with a dogged commitment to the truth.

A Macmillan Audio production from Henry Holt and Company

“Bernstein’s rollicking memoir…recalls the golden age of newspapers and how he fell in love with the exciting lives of journalists.” —New York Times Book Review
“Bernstein catches history in this thoroughly absorbing read.” —Booklist (starred review)
“Entertaining…with wry humor…Just as enthralling are his quaint recollections of growing up in DC, at a time when being raised there felt ‘akin to living in a small town.’” —Publishers Weekly (starred review)
“A welcome reminder of how important the press is and how much fun it used to be…A terrific read!” —Jon Meacham, #1 New York Times bestselling author
“With infinite curiosity and grit, goes from copyboy to newsman, from chasing history to making it.” —Doris Kearns Goodwin, #1 New York Times bestselling author
“[A] brilliantly crafted personal story…His rules―go anywhere, listen hard, push and push some more―are, to this day, the touchstone in investigative reporting." —Bob Woodward, #1 New York Times bestselling author

Carl Bernstein is the author or coauthor of five bestselling books, most notably All the President’s Men, written with Bob Woodward. He, Woodward, and the Washington Post were awarded the Pulitzer Prize for Public Service for breaking and investigating the Watergate story, which led to the resignation of President Richard Nixon and set the standard for modern investigative reporting. He is also the author of biographies of Pope John Paul II and Hillary Clinton and a memoir of his family’s experiences during the McCarthy era. He is an on-air political analyst for CNN and a contributing editor for Vanity Fair.