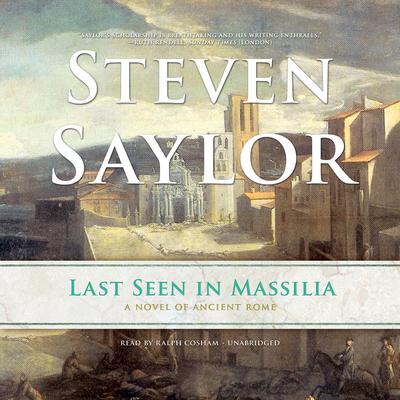 In 49 BC, in the city of Massilia (modern-day Marseille), on the coast of southern Gaul, Gordianus the Finder's beloved son Meto has disappeared—branded as a traitor to Caesar and apparently dead. Consumed with grief, Gordianus arrives in the city amid a raging civil war, hoping to discover what happened to his son. But when he witnesses a young woman fall from a precipice called Sacrifice Rock, he becomes entangled in discovering the truth: did she fall or was she pushed? And could she be connected to his missing son? Drawn into the city's treacherous depths, where nothing and no one are what they seem, Gordianus must summon all of his skills to discover his son's fate—and to safeguard his own life.

Steven Saylor delivers another excellent episode in the adventures of his distinguished hero, Gordianus the Finder.

“Saylor’s scholarship is breathtaking and his writing enthralls.” —Ruth Rendell, Sunday Times (London)
“Gordianus’ careful, thoughtful musings are infused with real pathos as he seeks out information about the lost adoptive son whom, he has been informed, is dead…Saylor has proven that he knows how to season a good plot with lively historical details, and this book is perhaps even more gratifying than previous installments.” —Amazon.com, editorial review
“In this exemplary eighth installment, Saylor links the case at hand to his larger concerns, the ongoing domestic saga of Gordianus’ family and the fate of Rome, with matchless elegance.” —Kirkus Reviews (starred review)
“Stellar…Saylor presents a vivid tableau of an ancient city under siege and an empire riven by internecine strife. Readers will impatiently long for the next book in what stands as one of today’s finest historical mystery series.” —Publishers Weekly
“Brilliant evocations of ancient Rome, deft plotting, and wry characterization…Saylor’s presentation of military engineering, battle strategy, and political corruption is fascinating; his plotting is made more exciting by the reader’s awareness that the sieges and naval battle forming the backbone of this mystery actually happened. One of the best in a long-running and steadily more popular series.” —Booklist