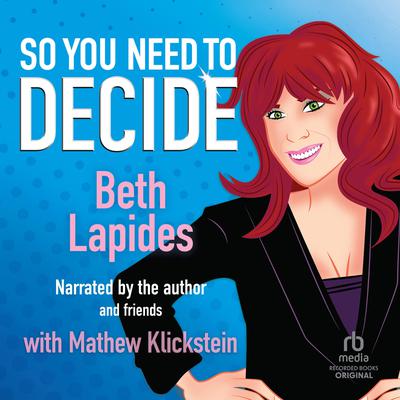 So You Need to Decide

Alt-comedy impresario Beth Lapides and multi-platform storyteller Mathew Klickstein bring together a stable of high-profile personalities in the modern comedy scene for a long-form cultural discussion via audiobook series.

Mathew Klickstein is a longtime writer, producer, and instructor who specializes in arts and culture reportage across all platforms. He was named “Humor Writer of the Month” via the prestigious Erma Bombeck Writers’ Workshop. His writings have appeared in Wired, the New Yorker, New York Daily News, and Vulture. He’s the writer of numerous nonfiction books on such topics as The Simpsons, Nickelodeon, and so-called “geek/fan culture.” Klickstein has worked extensively in all facets of live theater, film, and TV, and has recently entered the comic book creation field with his highly acclaimed series You Are Obsolete, currently being developed for television. Comic-Con Begins, his six-part audio documentary about the origins of the San Diego Comic-Con and the rise of modern fandom, was released via SiriusXM/Stitcher throughout Summer 2021. His recent middle-grade reader The Kids of Widney Junior High Take Over the World! received a 2021 Independent Publisher Book Award and is also available as an audiobook from Blackstone Publishing. www.MathewKlickstein.com