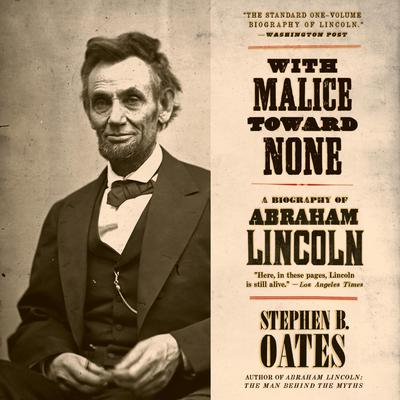 With Malice Toward None: A Biography of Abraham Lincoln

By Stephen B. Oates

The definitive life of Abraham Lincoln, With Malice Toward None is historian Stephen B. Oates’s acclaimed and enthralling portrait of America’s greatest leader. Oates masterfully charts, with the pacing of a novel, Lincoln’s rise from bitter poverty in America’s midwestern frontier to become a self-made success in business, law, and regional politics. The second half of the book examines his legendary leadership on the national stage as president during one of the country’s most tumultuous and bloody periods, the Civil War years, which concluded tragically with Lincoln’s assassination. In this award-winning biography, Lincoln steps forward out of the shadow of myth as a recognizable, fully drawn American whose remarkable life continues to inspire and inform us today.

Stephen B. Oates is the author of sixteen books, including The Approaching Fury; With Malice Toward None: A Life of Abraham Lincoln, and Let the Trumpet Sound: A Life of Martin Luther King Jr. He has won the Christopher Award and the Robert F. Kennedy Memorial Book Award for his work. Oates was a consultant and commentator in Ken Burns’s Civil War series on PBS, and is a recipient of the Nevins-Freeman Award of the Chicago Civil War Round Table for lifetime achievement in the field of Civil War studies. He is a professor emeritus at the University of Massachusetts, Amherst.