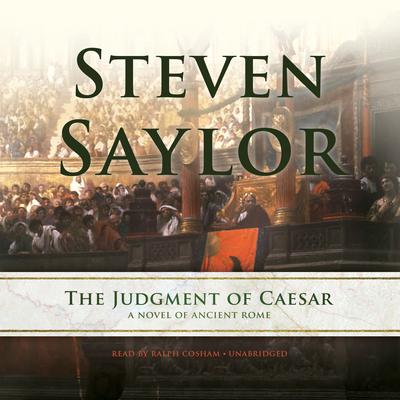 The Judgment of Caesar: A Novel of Ancient Rome

In 48 BC the Roman generals Caesar and Pompey are engaged in a battle to rule the world. As Pompey plots a reckless stand on the banks of the Nile, Gordianus the Finder—who has brought his dying wife, Bethesda, to the Nile seeking a cure from its sacred waters—finds himself suddenly at the heart of a series of treacherous and history-altering events.

While Caesar and Cleopatra embark on a legendary romance, Egypt remains ravaged by the brutal contest between the queen and her brother, King Ptolemy. Worst of all for Gordianus, Meto, his once-disowned son and Caesar's right-hand man, stands falsely accused of murder.

Caesar's judgment will decide his son's fate, and it is up to Gordianus to somehow overcome malevolent forces to reveal the carefully obscured truth in order to save his son's life.

“[A] confident re-creation of Alexandria at this crucial moment in both Egyptian and Roman history. As always in Saylor’s historical fiction, the interaction between powerful and ordinary people is a great strength…His Caesar is completely believable, as are his circuitous dealings with the Egyptian queen. Gordianus is as fascinating as he was as a young man, and the novel provides all the customary pleasures of serial fiction. But it also stands in its own right. Saylor evokes the ancient world more convincingly than any other writer of his generation.” —Sunday Times (London)
“Superb. From the exceptional attention to historical detail to the development of character and plot, which is based on real history, it’s a treat to read. All the action takes place in a time of great upheaval both in Rome and Egypt, and Saylor, an excellent scholar, makes the most of it. This is a great getaway novel.” —Globe & Mail (Toronto)
“[A] superb historical novel…The reader is engaged throughout…This is a compelling testament to Saylor’s growth as a writer and to his seemingly effortless ability to imagine characters who feel real. Longtime fans will find the evolution of Gordianus’ personal relationships fascinating, but the backstory is not so complex as to bar new readers from entering Saylor’s world.” —Publishers Weekly (starred review)
“Saylor is certainly among the best history-mystery writers going…He not only draws the reader into the fully realized, intrigue-filled era of Caesar and Pompey, he does so with grace, wit, and full-throttle suspense…The tenth Sub Rosa is a political thriller of the first order…Wonderful reading.” —Booklist (starred review)
“Expert mystery-mongering closely woven into a pageant featuring the most star-studded cast imaginable. Fans of the historical mystery couldn’t do better.” —Kirkus Reviews (starred review)
“A solid series addition.” —Library Journal