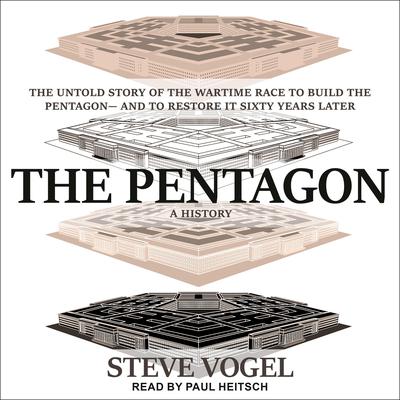 The Pentagon: A History

The creation of the Pentagon in seventeen whirlwind months during World War II is one of the great construction feats in American history, involving a tremendous mobilization of manpower, resources, and minds. In astonishingly short order, Brigadier General Brehon B. Somervell conceived and built an institution that ranks with the White House, the Vatican, and a handful of other structures as symbols recognized around the world. Now veteran military reporter Steve Vogel reveals for the first time the remarkable story of the Pentagon's construction, from it's dramatic birth to its rebuilding after the September 11 attack.

The Pentagon's post-World War II history is told through its critical moments, including the troubled birth of the Department of Defense during the Cold War, the tense days of the Cuban Missile Crisis, and the tumultuous 1967 protest against the Vietnam War. The pivotal attack on September 11 is related with chilling new detail, as is the race to rebuild the damaged Pentagon, a restoration that echoed the spirit of its creation.

This study of a single enigmatic building tells a broader story of modern American history, from the eve of World War II to the new wars of the twenty-first century. Steve Vogel has crafted a dazzling work of military social history.