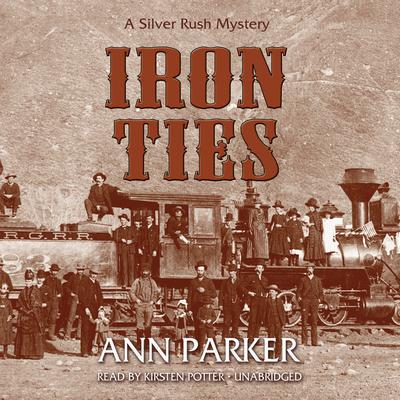 Winner of the Colorado Book Award for Genre Fiction

"The great questions of the time are not decided by speeches and majority decisions…but by iron and blood."—Otto von Bismarck, 1862

Summer 1880. The railroad is coming west, all the way to Leadville, Colorado, and its rich Rocky Mountain mines—and millionaires. Coming to celebrate the arrival of the Denver & Rio Grande Railroad is a former president, none other than Ulysses S. Grant, eighteenth president of the United States and commander of the Union armies during the Civil War.

But not everyone wants to celebrate the arrival of the railroad. Inez Stannert, like other residents in the Colorado boomtown, regards the news with mixed feelings. Her business partnership in the Silver Queen Saloon is still shaky and the bonds of family still tenuous, with her husband missing and her son living back east. Inez doesn't want to see lawlessness escalate and lead, once again, to murder.

Inez isn't the only one with iron ties to the past. Some folks have wicked memories of the Civil War, and others a stake in the competing railroad lines. Caught in the crossfire is Inez's friend, photographer Susan Carothers. An explosion that nearly killed Susan has killed another—or could it have been murder? It's up to Inez to investigate.

“Iron Ties [is] full of sharply etched characters set firmly in history and pulled along by a narrative engine as powerful as any of the locomotives getting ready in 1880 to connect Leadville to the outside world…Parker knows her Leadville history…[An] exciting, entertaining series.” —Chicago Tribune
“Iron Ties is a terrific Reconstruction Era mystery that provides the audience with a deep look at the period when official hostilities were over but passions still flared into violence. The story line in many ways is more of a historical thriller, though Inez’s amateur sleuth investigation is deftly handled and the cast three dimensional. Ann Parker provides a delightful late nineteenth-century Americana investigative tale.” —Midwest Book Review
“Set in the summer of 1880, Parker’s outstanding second Silver Rush mystery (after 2003’s Silver Lies) finds her heroine, Inez Stannert, corset-deep in the intrigues of Leadville, Colorado. Inez’s secret courtship with the Reverend Justice B. Sands is as heated as the conflict over the incoming railroad. When the local authorities question the reliability of Inez’s friend, photographer Susan Carothers, who witnesses a shooting and explosion along the rail line, it’s up to Inez to discover the truth. In one of the many nice twists in this appealing adventure, the attractive railroad man Inez meets during her investigation turns out to be one of the good reverend’s Civil War comrades. In an effort to increase business at the Silver Queen saloon, Inez’s business partner, Abe Jackson, engages an acting couple to perform. None too happily, Inez realizes why the beautiful actress seems so familiar. A ragged piece of cloth becomes a major clue as the clock ticks and the town readies for a visit from former US president Ulysses S. Grant. Plenty of convincing action bodes well for a long and successful series.” —Publishers Weekly (starred review)
“Susan Carothers is a young photographer in the Old West, hoping her prints of the magnificent Colorado landscape will sell in her gallery. But a solo trip into the high country quickly turns into a nightmare when she witnesses a murder, and a dynamite blast unleashes a rockslide that kills one man involved in the murder and nearly kills her. Carothers recuperates while her friend, Inez Stannert, tries to piece together what exactly it was that Susan witnessed. Stannert owns Leadville’s saloon and can’t afford to have the small community on which she’s staked her future be reduced to lawlessness. This sequel to the critically acclaimed Silver Lies (2003) will not disappoint Parker’s fans. The characters have depth, their motivations are subtle, and their pain very human. Add carefully researched and fascinating period detail, and one has a carefully crafted novel that will appeal to readers of mysteries, historical fiction, and genre westerns.” —Booklist