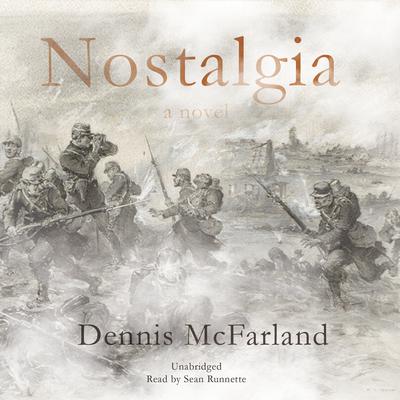 From bestselling author Dennis McFarland comes an extraordinary Civil War novel: the journey of a nineteen-year-old private abandoned by his comrades in the Wilderness, struggling to regain his voice, his identity, and his place in a world utterly changed by what he has experienced on the battlefield.

In the winter of 1864, young Summerfield Hayes, a pitcher for the famous Eckford Club, enlists in the Union army, leaving his sister, a schoolteacher, devastated and alone in their Brooklyn home. The siblings, who have recently lost both their parents, are unusually attached, and Summerfield fears his untoward, secret feelings for his sister. This rich backstory is intercut with stunning scenes of Hayes' soul-altering hours on the march, at the front—the slaughter of barely grown young men who, only days before, whooped it up with him in a regimental ball game; his temporary deafness and disorientation after a shell blast; his fevered attempt to find safe haven after he has been deserted by his own comrades—and later, in the Washington military hospital where he eventually finds himself, now mute and unable even to write his name. In this twilit realm, among the people he encounters—a compassionate drug-addicted amputee, the ward matron who only appears to be his enemy, the captain who is convinced that Hayes is faking his illness—is a gray-bearded eccentric who visits the ward daily and becomes his strongest advocate: Walt Whitman. This timeless story, whose outcome hinges on the fellowship that is forged in crisis, reminds us how deep are the wounds of war, not all of which are visible.

“Walt Whitman, who haunts the pages of this sensitive, ingenious, beautifully written novel, famously said that the real Civil War would ‘never get into the books.’ Nostalgia deftly explores an aspect of war little understood in Whitman’s time or in our own—the invisible wounds combat inflicts upon many of those who somehow manage to survive it.” —Geoffrey C. Ward, New York Times bestselling author
“Searing, poetic, and often masterly…The novel moves gracefully back and forth through time…As the narrative moves to Hayes’ time at the front, McFarland’s prose all but lifts off the page…That McFarland can make such difficult subject matter both entertaining and essential is a tribute to his evident literary talents. Nostalgia is a perfect Civil War novel for our time, or any time.” —New York Times Book Review
“Employing three alternating narrative strands—Hayes’s idyllic life in his native Brooklyn, his horrifying battlefield experiences, and his nightmarish hospital recuperation—McFarland manages to find something new to say about a war that could have had everything said about it already. In the end, this is a moving account of one soldier’s journey to hell and back, and his struggle to make his own individual peace with the world afterward.” —Publishers Weekly
“By capturing the kaleidoscopic, hallucinogenic nature of warfare persuasively, [McFarland] skillfully brings his psychologically shattered protagonist through the difficult journey and returns him to health and sanity—kindness and compassion are what saves him. The characters here are especially well drawn, including a genial and wise old hospital volunteer named Walt Whitman. Masterful writing recommended for Civil War buffs and fans of literary fiction.” —Library Journal
“Using a complex, effective narrative strategy, McFarland moves us confidently from battlefield to hospital to baseball diamond as well as through dream, reverie, and memory. A distinguished addition to fictionalized narratives focused on the Civil War and its aftermath.” —Kirkus Reviews

Dennis McFarland is the bestselling author of the novels Letter from Point Clear, A Face at the Window, School for the Blind, and The Music Room, among others. His short fiction has appeared in theAmerican Scholar, the New Yorker, Prize Stories: The O. Henry Awards,Best American Short Stories, and elsewhere. He received a fellowship from the National Endowment for the Arts and the Wallace E. Stegner Fellowship from Stanford University, where he has also taught creative writing. He lives in rural Vermont with his wife, the writer and poet Michelle Blake.