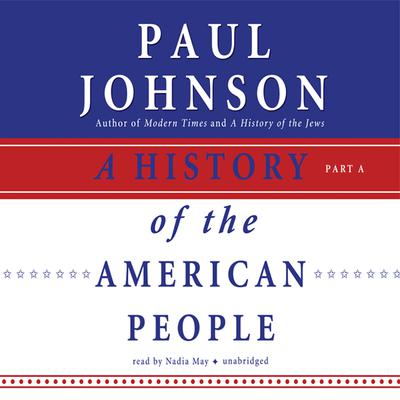 A History of the American People

By Paul Johnson
Read by Nadia May

Johnson’s monumental history of the United States, from the first settlers to the Clinton administration, covers every aspect of American culture: politics, business, art, literature, science, society and customs, complex traditions, and religious beliefs. The story is told in terms of the men and women who shaped and led the nation and the ordinary people who collectively created its unique character. Anne Hutchinson, Cotton Mather, Ben Franklin, Thomas Paine, George Washington, John Adams, and Thomas Jefferson, among others, are all presented with a fresh perspective. Wherever possible, letters, diaries, and recorded conversations are used to ensure a sense of actuality.

This is an in-depth portrait of a great people, from their fragile origins and struggles for independence, to their heroic efforts and sacrifices to deal with the “organic sin” of slavery and the preservation of the Union, to their explosive economic growth and emergence as the world’s greatest superpower.

“Arresting contentions and pieces of fascinating oddball information.” —New York Times Book Review
“A fresh, readable and provocative survey. He is full of opinions...and Johnson can be very wise.” —Los Angeles Times
“A magnificent achievement...brilliantly combines broad sweep with extraordinary detail.” —Wall Street Journal
“This is vivid and memorable writing...Proves that history can still be literature.” —National Review
“Paul Johnson’s The History of the American People is as majestic in its scope as the country it celebrates...It is a compelling antidote to those who regard the future with pessimism.” —Henry A. Kissinger
“[May’s] reading is lively, crisp, and sharp throughout. Johnson is a lively writer (more so than nearly all other historians), and May’s reading is sensitive to Johnson’s wit and sharp comments.” —AudioFile
“Expectations for a memorable, pleasurable, and instructive reading experience…are magnificently met. No dull pages occupy the space between the Puritans’ ‘City upon a Hill’ and superpower America…A work one can't begin to disagree with even partially without reading it wholly, which legions will eagerly do.” —Booklist