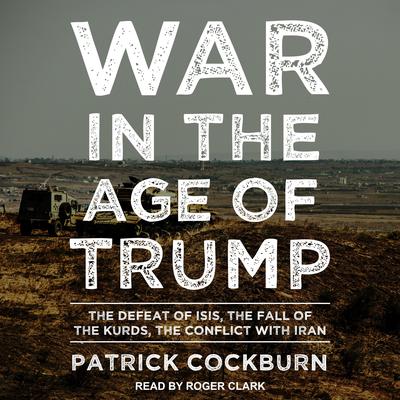 War in the Age of Trump: The Defeat of ISIS, the Fall of the Kurds, the Conflict with Iran

Is the fall of ISIS the end of the perpetual war in the Middle East?

In this urgent and timely book, Patrick Cockburn writes the first draft of the history of the current crisis in the Middle East. Here he charts the period from the recapture of Mosul in 2017 to Turkey's attack on Kurdish territory in November 2019, and recounts the new phase in the wars of disintegration that have plagued the region. The ground battle with the caliphate is perhaps over, but was this the end of the conflict that has scarred these nations for decades?

Cockburn offers panoramic on-the-ground analysis as well as a lifetime's study of the region. And here he shows how peace appears a distant possibility with the continuation of conflict in Syria, Saudi Arabia's violent intervention in the Yemen, riots in Baghdad and Tehran. At the same time, the rising aggression between Israel and Iran, the raising of stakes between the US, Russia, and Turkey, shows that this remains the theater of the proxy wars of the world's superpowers. Has Trump abandoned the area for good, leaving a vacuum for others—Putin, Erdogan, Mohammed Bin Saud—to fill? He also looks at what might happen to the Islamic State: will it disappear now that it has lost its territory or emerge in a new form and with renewed violence?

Patrick Cockburn, Middle East correspondent for the Independent, has been visiting Iraq since 1978. He was awarded the 2005 Martha Gellhorn prize for war reporting. He is the author of The Broken Boy, a memoir, and, together with Andrew Cockburn, Saddam Hussein: An American Obsession.