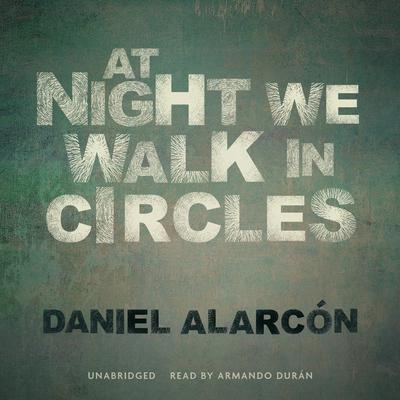 At Night We Walk in Circles

A San Francisco Chronicle Best Book of 2013 in Fiction

The breakout book from a prizewinning young writer: a breathtaking, suspenseful story of one man's obsessive search to find the truth of another man's downfall

Nelson's life is not turning out the way he hoped. His girlfriend is sleeping with another man; his brother has left their South American country and moved to the United States, leaving Nelson to care for their widowed mother; and his acting career can't seem to get off the ground. That is, until he lands a starring role in a touring revival of The Idiot President, a legendary play by Nelson's hero, Henry Nu├▒ez, leader of the storied guerrilla theater troupe Diciembre. And that's when the real trouble begins.

The tour takes Nelson out of the shelter of the city and across a landscape he's never seen, which still bears the scars of the civil war. With each performance Nelson grows closer to his fellow actors, becoming hopelessly entangled in their complicated lives until, during one memorable performance, a long-buried betrayal surfaces to force the troupe into chaos.

Nelson's fate is slowly revealed through the investigation of the narrator, a young man obsessed with Nelson's story—and perhaps closer to it than he lets on. In sharp, vivid, and beautiful prose, Alarc├│n delivers a compulsively readable narrative and provocative meditation on fate, identity, and the large consequences that can result from even our smallest choices.

“Layered, gorgeously nuanced…A vibrant, ambitiously political story that derives its power from the personal. The rare lapse into abstraction quickly gives way to particulars described with devastating clarity. We are left with pure story, one that seems to question even its own motives while refusing to take sides in a world stripped of illusions.” —New York Times Book Review
“A profound meditation on how identity is less a fixed substance within us, than an ever-shifting performance in reaction to a perceived audience. The unstated thesis of the novel may in fact be that we are all unknowable, even to ourselves.” —San Francisco Chronicle
“Riveting…A fast-unraveling mystery of role-playing and retribution, told in compelling prose that is smart, subtle, and totally engrossing. Alarcón possesses Alejo Carpentier’s gift for evocative descriptions of anonymous geography, and one sees shades of Manuel Puig in the passages that recount Henry’s incarceration, both of which bode well for this native Peruvian’s bright literary future.” —Booklist (starred review)
“Nelson’s story is told by an unnamed narrator whose intrusions telegraph that the protagonist’s story might not end well…Alarcón recreates the tense atmosphere of what it is like to live in a country where words have consequences.” —Publishers Weekly
“An involving and dramatic story in a vague yet realistic landscape. Alarcón strings the reader along expertly as he slowly complicates and shifts the perspective in this tragic tale of characters, citizens, lovers, and artists being influenced by the dangerous forces of political history and human desire.” —Library Journal
“As in Lost City Radio, this novel is concerned with the aftereffects of revolution and the surprising ways revolutionary rhetoric endures…Mind who you pretend to be, Alarcón suggests; the story you tell can be a surprisingly potent one. That’s true with this book too…Alarcón successfully merges themes of art, love and politics.” —Kirkus Reviews
“In writing about a place, its people and its history, Daniel Alarcón’s memory catches the evanescent details of everyday life, while his imagination, never for a moment blurred, creates a powerful story with so many intricate characters. This is a novel written with extraordinary vision and wisdom.” —Yiyun Li, author of Gold Boy
“This is a devastatingly good novel and a masterful work by a gifted storyteller. Via the tangled lives of a small group of Peruvian actors, and in clear, compelling prose, Daniel Alarcón weaves a suspenseful tale about illusion and longing, love and denial—about all the kinds of human exile.” —Jon Lee Anderson, author of Che Guevara: A Revolutionary Life

Daniel Alarcón is the author of At Night We Walk in Circles, which was a finalist for the 2014 Pen-Faulkner Award, as well as the story collection War by Candlelight, the novel Lost City Radio, and the graphic novel City of Clowns. His writing has appeared in the New Yorker, the New York Times Magazine, Granta, n+1, and Harpers, and he was named one of the New Yorker’s “20 Under 40.” He is executive producer of “Radio Ambulante,” distributed by NPR, and is an assistant professor of broadcast journalism at the Columbia University School of Journalism in New York.