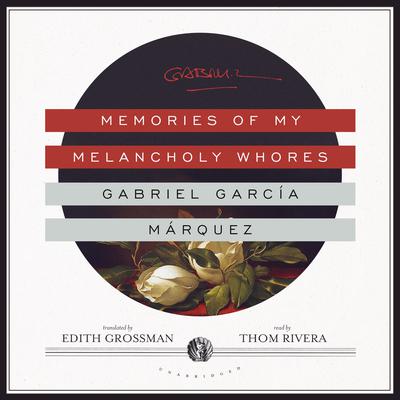 Memories of My Melancholy Whores

Winner of the 2005 Los Angeles Times Book Prize for Fiction

On the eve of his ninetieth birthday, a bachelor decides to give himself a wild night of love with a virgin. As is his habit—he has purchased hundreds of women—he asks a madam for her assistance. The fourteen-year-old girl who is procured for him is enchanting, but exhausted as she is from caring for siblings and her job sewing buttons, she can do little but sleep. Yet with this sleeping beauty at his side, it is he who awakens to a romance he has never known.

Tender, knowing, and slyly comic, Memories of My Melancholy Whores is an exquisite addition to a master's work.

“García Márquez…has composed, with his usual sensual gravity and Olympian humor, a love letter to the dying light.” —John Updike
“Luminous…The cunning of Memories of My Melancholy Whores lies in the utter—and utterly unexpected—reliability of its narrator.” —New York Times Book Review
“Profoundly haunting…Fiction of the very highest order.” —Times Literary Supplement
“Masterful. Erotic. As hypnotizing as it is disturbing.” —Los Angeles Times
“Unforgettable…Classic García Márquez.” —Washington Post
“For heaven’s sake read it. It is as accomplished a piece of storytelling as you are likely to find on the shelves today.” —Chicago Tribune
“The Colombian master storyteller’s latest novel is grounded in the steamy atmosphere and gamey politics of his native country; at the same time, in the universality of its theme, it transcends the peculiar traits of his bougainvillea-filled homeland. Composed with the metaphorical lyricism of a parable but without that narrative form’s usual moralizing intent, García Marquez’s novel briefly but piquantly captures a single year toward the end of a long string of years in the life of a nonagenarian…García Marquez’s beautiful, poignant story both avoids sentimentality and escapes salaciousness.” —Booklist (starred review)
“Flashes of García Márquez’s brilliant imagery…illuminate the novella, and there are striking insights into the euphoria that is the flip side of the fear of death.” —Publishers Weekly