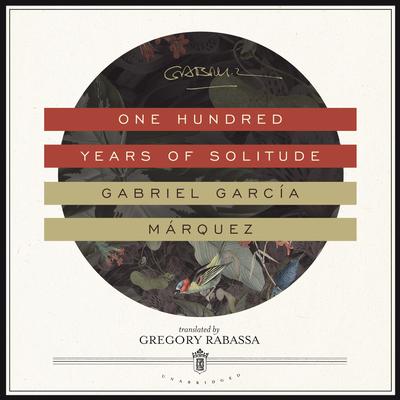 One Hundred Years of Solitude

One of Audible’s Best Audiobooks of 2014: Classics

A London Guardian Pick of Books to Inspire, Uplift and Offer Escape

One of the twentieth century’s enduring works, One Hundred Years of Solitude is a widely beloved and acclaimed novel known throughout the world and the ultimate achievement in a Nobel Prize–winning career.

Love and lust, war and revolution, riches and poverty, youth and senility, the variety of life, the endlessness of death, the search for peace and truth—these universal themes dominate the novel. Alternately reverential and comical, One Hundred Years of Solitude weaves the political, personal, and spiritual to bring a new consciousness to storytelling. Translated into dozens of languages, this stunning work is no less than an account of the history of the human race.

Visit http://www.blackstoneaudio.com/docs/Family_Tree.pdf to access a bonus PDF with a family tree.

“The first piece of literature since the Book of Genesis that should be required reading for the entire human race.” —William Kennedy, New York Times bestselling author
“More lucidity, wit, wisdom, and poetry than is expected from one hundred years of novelists, let alone one man.” —Washington Post Book World
“García Márquez feeds the mind’s eye nonstop…Like the jungle itself, this novel comes back again and again, fecund, savage, and irresistible.” —Chicago Tribune Book World
“Unofficially, it’s everybody’s favorite work of world literature and the novel that, more than any other since World War II, has inspired novelists of our time…sexy, entertaining, experimental, politically radical, and wildly popular all at once.” —Vanity Fair
“Narrator John Lee pulls listeners into this enchanting and mystical tale, often described as the quintessential Latin American novel…Listeners will enjoy Lee’s enticing images of gypsies’ flying carpets and conversational ghosts, and embrace Lee’s solemnity as he describes the soldier patriarch who lost thirty-two consecutive wars and the children born with pigs’ tails. Soon, one is entwined in Márquez’s magical world.” —AudioFile
“My favorite novels are extended songs. What is One Hundred Years of Solitude if not an opera? And a grand one at that!” —Sting, Grammy Award–winning singer-songwriter and musician
“[One Hundred Years of Solitude] stands at the apex of twentieth-century literature.” —Amazon.com
“If Senor Garcia-Marquez’ book is fable, it is also satire with some of the fanciful giantism of earlier proponents…A luxuriant, splendid, and spirited conception.”                —Kirkus Reviews