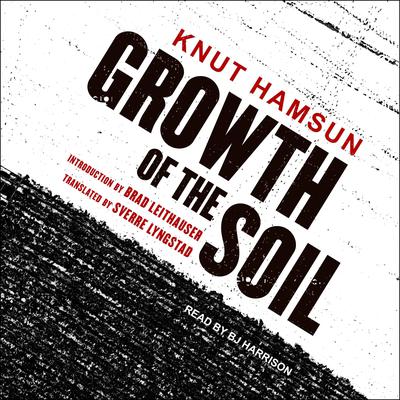 Growth of the Soil

By Knut Hamsun
Introduction by Brad Leithauser
Translated by Sverre Lyngstad
Read by B. J. Harrison

Growth of the Soil, Hamsun's Nobel Prize winning novel, is a classic of Scandinavian literature.

The farmer Isak scarcely acknowledges the values of modern living. Illiterate but capable of carrying out the business of running a farm, he has physical strength and works with his hands. Although initially amazed by Isak's prowess—his wife Inger, who came into contact with modern society when imprisoned for killing her infant due to its birth defect, return to the home much less impressed by the country life.

Isak's deeply held passion for the Norwegian countryside is contrasted against the cosmopolitan and intellectual traits expressed in his son Eleseus. Despite his superior mental faculties, Eleseus frequently spends his money carelessly on his travels, exasperating his parents with requests for financial support.

Growth of the Soil openly displays the conflicts between the old traditions of agrarian society, and the ever-mounting wonders and conveniences offered by modern society.