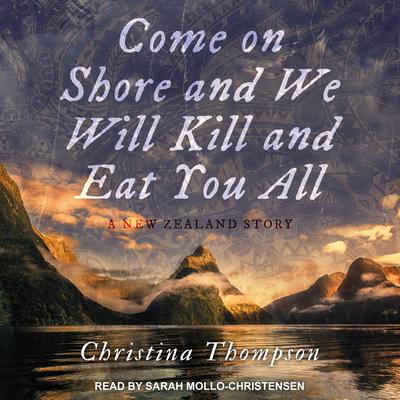 Come On Shore and We Will Kill and Eat You All: A New Zealand Story

Come on Shore and We Will Kill and Eat You All is the story of the cultural collision between Westerners and the Maoris of New Zealand, told partly as a history of the complex and bloody period of contact between Europeans and the Maoris in the late 18th and early 19th centuries, and partly as the story of Christina Thompson's marriage to a Maori man.

As an American graduate student studying history in Australia, Thompson traveled to New Zealand and met a Maori known as "Seven." Their relationship is one of opposites: he is a tradesman, she is an intellectual; he comes from a background of rural poverty, she from one of middleclass privilege; he is a "native," she descends directly from "colonizers." Nevertheless, they shared a similar sense of adventure and a willingness to depart from the customs of their families and forge a life together on their own.

In this book, which grows out of decades of reading and research, Thompson explores cultural displacement through the ages and the fascinating history of Europeans in the South Pacific, beginning with Abel Tasman's discovery of New Zealand in 1642 and Cook's circumnavigation of 1770.

Christina Thompson is the editor of The Harvard Review, a literary journal published by Houghton Library at Harvard University. Her memoir Come on Shore and We Will Kill and Eat You All, which was shortlisted for the 2009 NSW Premier’s Award and the 2010 William Saroyan International Prize for Writing. A dual citizen of the United States and Australia, she is the recipient of fellowships from the National Endowment for the Arts, Arts Victoria, and the Literature Board of the Australia Council. In 2015 she received one of 36 inaugural National Endowment for the Humanities Public Scholar Awards for this book. Her essays and reviews have appeared in a wide range of scholarly and popular publications, including Vogue, the American Scholar, the Journal of Pacific History, and three editions of Best Australian Essays. She writes regularly for the books pages of the Boston Globe.

Christina received her BA from Dartmouth College and her PhD from the University of Melbourne. From 1994 to 1998 she was editor of the Australian literary journal Meanjin. She teaches in the writing program at Harvard Summer School and Harvard University Extension, where she was awarded the James E. Conway Excellence in Teaching Award in 2008. She is married to Tauwhitu Parangi, a member of the Ngati Rehia hapu of the Nga Puhi tribe of Aotearoa (New Zealand), with whom she has three sons.