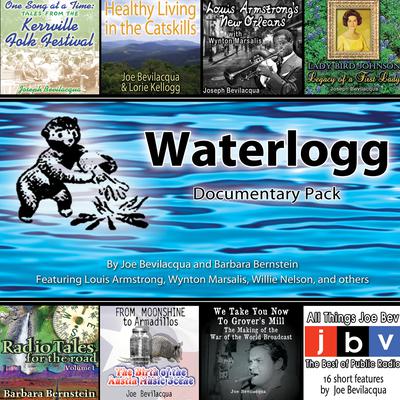 One Song at a Time

This radio performance includes many stories about the Kerrville Folk Festival, the longest continuously running music festival in North America.

One of the most licensed audiobooks on the Public Radio Exchange and iTunes, Lady Bird Johnson is an award-winning audio documentary examining the challenges and achievements of this extraordinary woman.

From Moonshine to Armadillos

Veteran NPR producer Joe Bevilacqua hosts this hour long program outlining the history of Threadgill's and Armadillo World Headquarters, which contributed to the birth of the Austin music scene.

Recorded in the French Quarter of New Orleans, this radio program features jazz great Wynton Marsalis, and others, who talk on the origins of jazz, and the life and music of legendary trumpeter, Louis Armstrong.

Healthy Living in the Catskills

In this radio documentary, a husband and wife explore the rural byways within four miles of their home in the foothills of the Catskill Mountains of upstate New York, and find local business owners working to promote healthy lifestyles that have a national impact.

Radio Tales for the Road, Volume One

Combining storytelling, documentary, radio drama, and original music, Radio Tales for the Road are vivid recollections of the 1960s.

We Take You Now to Grover's Mill

This 1988 documentary looks at how the landmark broadcast came about and examines its impact on broadcast history. The program includes rare interviews with Mercury Theater producer John Houseman and writer Howard Koch, actor Arthur Anderson and the people of Grover's Mill, New Jersey who lived through the "Martian invasion."