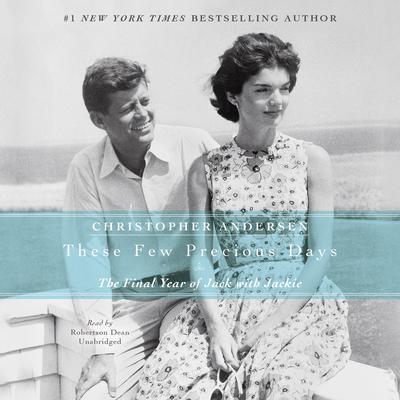 These Few Precious Days: The Final Year of Jack with Jackie

They were the original power couple—outlandishly rich, impossibly attractive, and endlessly fascinating. Now, in this rare behind-the-scenes portrait of the Kenne┬¡dys in their final year together, #1 New York Times bestselling biographer Christopher Andersen shows us a side of JFK and Jackie we've never seen before. Tender, intimate, complex, and, at times, explosive, theirs is a love story unlike any other—filled with secrets, scandals, and bomb┬¡shells that could never be fully revealed … until now.

Andersen reveals stunning new details about the Kennedys' rumored affairs—hers as well as his—and how they ultimately overcame all odds to save their marriage; the president's many premonitions of his own death and how he repeatedly tried to pull out of his last fateful trip to Dallas; shocking revelations about how the couple, unaware of the dangers, became dependent on amphetamine injections, the real reason—according to his longtime personal physician—for JFK's notorious libido; how the tragic death of their infant son Patrick led to an emotional outpouring from the president that surprised even their closest friends—and brought JFK and Jackie closer than they had ever been; and touching firsthand accounts of the family's most private moments, before and after the assassination.

Drawing on hundreds of interviews conducted with the Kennedys' inner circle—from family members and lifelong friends to key advisors and political confidants—Andersen takes us deeper inside the world of the president and his first lady than ever before. Unsparing yet sym┬¡pathetic, bigger than life but all too real, These Few Precious Days captures the ups and downs of a marriage, a man, and a woman, the memories of which will continue to fascinate and inspire for generations to come.

“These Few Precious Days is not a mere scandal tell-all, though the Kennedys gave us plenty of latitude for speculation. Andersen’s account carries weight as it examines the tension, depression, and fear at the White House during the crucial days of the Cuban Missile Crisis.” —BookReporter.com