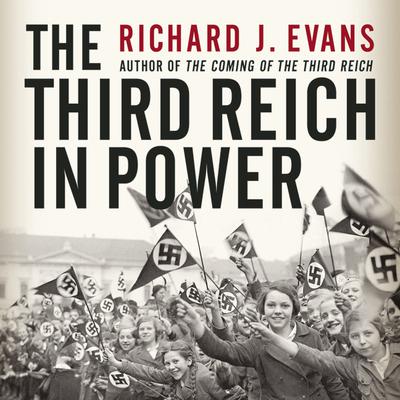 The Third Reich in Power

The definitive account of Germany's malign transformation under Hitler's total rule and the implacable march to war This magnificent second volume of Richard J. Evans's three-volume history of Nazi Germany was hailed by Benjamin Schwartz of the Atlantic Monthly as "the definitive English-language account... gripping and precise." It chronicles the incredible story of Germany's radical reshaping under Nazi rule. As those who were deemed unworthy to be counted among the German people were dealt with in increasingly brutal terms, Hitler's drive to prepare Germany for the war that he saw as its destiny reached its fateful hour in September 1939. The Third Reich in Power is the fullest and most authoritative account yet written of how, in six years, Germany was brought to the edge of that terrible abyss.

“[Evans’] three-volume history…is shaping up to be a masterpiece. Fluidly narrated, tightly organized, and comprehensive.” —New York Times
“In the second part of a three-volume history of the Third Reich, Evans examines Hitler’s regime in the six years running up to the Second World War, exploring everything from art to the economy and shifting diplomatic alliances. He offers exhaustive statistical analysis coupled with the compelling personal narratives of dignitaries, dissidents, and such ordinary Germans as a Hamburg schoolteacher.” —New Yorker
“In sharp detail, Evans shows how Hitler seized upon his political victory and immediately began his plan for the Nazi infiltration of every aspect of German society…Well written and logically organized, The Third Reich in Power is an impressive work of meticulous, readable history.” —Amazon.com, editorial review
“A major achievement. No other recent synthetic history has quite the range and narrative power of Evans’ work. There are no surprises here. Instead, the reader will find careful, detailed analyses of all the major issues relating to the Third Reich between Hitler’s assumption of power on January 31, 1933, and the start of WWII on September 1, 1939.” —Publishers Weekly (starred review)
“Examining the populace more than the dictator, Evans expertly surveys Nazidom’s precepts and criminality.” —Booklist