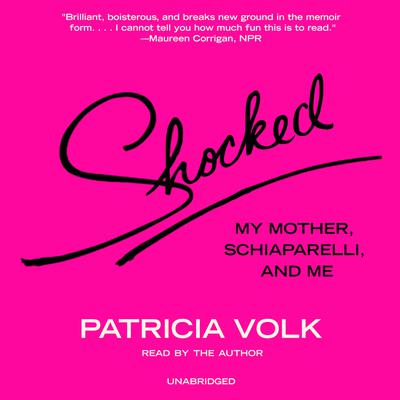 Shocked: My Mother, Schiaparelli, and Me

From the acclaimed author of Stuffed comes an intimate memoir, written with charm and panache, that juxtaposes two fascinating lives—the iconoclastic designer Elsa Schiaparelli and the author's own mother—to explore how a girl fashions herself into a woman.

Audrey Morgen Volk, an upper-middle-class New Yorker, was a great beauty and the polished hostess at her family's garment district restaurant. Elsa Schiaparelli—"Schiap"—the haute couture designer whose creations shocked the world, blurred the line between fashion and art, and believed that everything, even a button, has the potential to delight.

Audrey's daughter Patricia read Schiap's autobiography, Shocking Life, at a tender age, and was transformed by it. These two women—volatile, opinionated, and brilliant each in her own way—offered Patricia contrasting lessons about womanhood and personal style that allowed her to plot her own course.

Moving seamlessly between the Volks' Manhattan and Florida milieu and Schiap's life in Rome and Paris (among friends such as Dal├¡, Duchamp, and Picasso), Shocked weaves Audrey's traditional notions of domesticity with Schiaparelli's often outrageous ideas into a marvel-filled meditation on beauty and on being a daughter, sister, and mother, while demonstrating how a single book can change a life.

“A brilliant, boisterous memoir that breaks new ground in terms of the memoir form…I cannot tell you, apart from its other virtues, how much fun this memoir is to read.” —Maureen Corrigan, NPR
“Volk expresses a touch of heroine worship for both her mother’s glamorous pragmatism and Elsa Schiaparelli’s functional extravagance. The women make an unlikely pair, but Volk’s nostalgic voice wisely integrates the best of them both. It does so with such engaging generosity and kindness that this funny, melancholic memoir ultimately feels like an embrace.” —Andrew Solomon, New York Times bestselling author of Far From the Tree
“A sensual memoir…It’s a time machine laden with long-lost physical objects (dance cards, darning eggs), a meditation on the plastic possibilities of womankind, and a very special treat.” —New York Times Book Review
“It’s a pure joy to be in Patricia Volk’s presence on the pages of her new book, Shocked. A diptych portrayal of her gorgeous and infuriating mother and the great fashion designer Elsa Schiaparelli, this is an irresistible tour de force that puts on display Volk’s intelligence, wit, and sparkling prose.” —Louis Begley, Hemingway Foundation/PEN Award–winning author
“Bestselling author Volk is at the top of her game with this witty, nostalgic look at womanhood and style. She juxtaposes remembrances of her beautiful mother with the life of an iconic Italian fashion designer in a way that’s charming and wholly original.” —Reader’s Digest
“We feel life’s potential swirling around Volk as she lovingly chronicles the unique paths of her two muses.” —O, The Oprah Magazine
“Volk is thoroughly likable, warm, and generous, with a well-tuned ear and a vivid sense of humor. She captures her mother perfectly…[Her] delightful book draws you in right at the start.” —Wall Street Journal
“Volk [stitches] together a visually evocative coming-of-age story about fashion, femininity, and the often complicated mother-daughter dynamic.” —Entertainment Weekly
“Humor…emotional complexity…smarts. [Shocked is] a brilliant, boisterous memoir that breaks new ground in terms of the memoir form and also the archetypal story of the mother-daughter bond…I cannot tell you, apart from its other virtues, how much fun this memoir is to read.” —NPR
“Volk offers the beautifully rendered story of her own life, of her all-important relationship with her mother, and of the book that was, for her, a touchstone…In a marketplace sodden with memoirs…Shocked stands out both by virtue of its premise and because of the incandescence of its language…It is hard to image that any reader, especially a female reader, will be able to finish Shocked without a match being struck to the dry tinder of their own memories of childhood, setting things ablaze. Shocked is a brilliant thing, well considered, well wrought, and wonderfully well written.” —New York Journal of Books
“Volk has a talent for unearthing meaning in the seemingly mundane…This memoir is a compelling tribute to two ambitious women who were way ahead of their time.” —Publishers Weekly (starred review)
“Sophisticated…As funny as it is poignant, Volk’s work employs a combination of words to live by, rich vignettes, and photographs to show how she learned what it meant to be a woman and how all it takes is one book to transform a young person’s world. Full of high fashion, mink furs, and family, the book manages to weave a tale that is sure to stick with readers long after the last page.” —Library Journal (starred review)
“Volk writes eloquently…The contrast between Audrey and Elsa couldn’t be more startling or poignant…but parallels also abound, and through Volk’s history and memories, we get the best of both women and their impact on the author.” —Booklist
“The narrative that emerges from Volk’s deft interweaving of lives is as sharp-eyed as it is wickedly funny. Her attention to detail, especially in her evocations of 1950s New York, is nothing short of delicious. Witty, tender, and vividly nostalgic.” —Kirkus Reviews
“You have to be very grown up to write a memoir as wise as Shocked. It helps to have a prose style as supple, elegant, witty, and modest as Patricia Volk’s. This is a truthful, wholly original portrayal of mother-daughter love, and (incidentally) of the joys and limitations of a passion for fashion. It deserves to become a classic.” —Kennedy Fraser, award-winning writer
“This daring and irresistible catalog of the secrets of women cements Volk’s reputation as one of our most amusing writers. What in academic circles might be called ‘the construction of gender’ is here brought vividly and hilariously to life. If God is in the details, then this is one of the godliest books I’ve read in ages, because the details are priceless.” —Phillip Lopate, author and film critic

Patricia Volk is the author of the memoir Stuffed: Adventures of a Restaurant Family and four works of fiction. A recipient of a Guggenheim Fellowship, she has written for the New York Times, the Atlantic, the New Yorker, and Playboy. She lives in New York City.