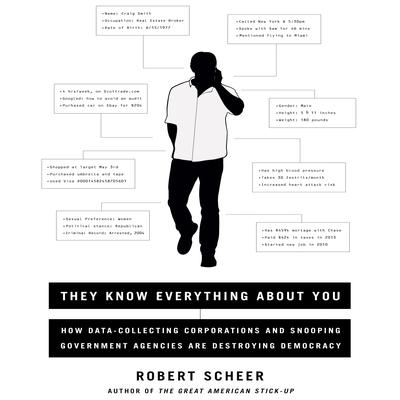 They Know Everything About You: How Data-Collecting Corporations and Snooping Government Agencies Are Destroying Democracy

They Know Everything About You is a groundbreaking exposé of how government agencies and tech corporations monitor virtually every aspect of our lives, and a fierce defense of privacy and democracy. The revelation that the government has access to a vast trove of personal online data demonstrates that we already live in a surveillance society. But the erosion of privacy rights extends far beyond big government. Intelligence agencies such as the NSA and CIA are using Silicon Valley corporate partners as their data spies. Seemingly progressive tech companies are joining forces with snooping government agencies to create a brave new world of wired tyranny. Life in the digital age poses an unprecedented challenge to our constitutional liberties, which guarantee a wall of privacy between the individual and the government. The basic assumption of democracy requires the ability of the individual to experiment with ideas and associations within a protected zone, as secured by the Constitution. The unobserved moment embodies the most basic of human rights, yet it is being squandered in the name of national security and consumer convenience. Robert Scheer argues that the information revolution, while a source of public enlightenment, contains the seeds of freedom’s destruction in the form of a surveillance state that exceeds the wildest dream of the most ingenious dictator. The technology of surveillance, unless vigorously resisted, represents an existential threat to the liberation of the human spirit.

“Scheer has undertaken a penetrating examination of Americans’ disappearing privacy and issued a clarion call in these pages, lest we unwittingly click away our freedom.” —John W. Dean, New York Times bestselling author
“Scheer reminds us that privacy is everything…and yet it’s disappearing faster than an electronic blip moving at warp speed from your computer to the NSA. With clarity and precision, Scheer dissects the military-intelligence complex, showing it to be neither very secure nor very intelligent, but, rather, dangerous to us all.” —Robert B. Reich, New York Times bestselling author
“Scheer acquits himself as a passionate advocate for privacy rights; you’d want him by your side at a protest.” —Los Angeles Times
“Powerfully connects the dots of our chilling Orwellian present, one in which privacy is considered a luxury, rather than a right…Scheer also notes that reliance on megadata has not served the US defense policy well. He ends with a collective call to action and his argument for what’s at stake with the technology of surveillance is starkly clear.” —Publishers Weekly
“Scheer analyzes the complicity among corporations and government agencies in the mass online data collection of United States citizens…A timely and accessible account.” —Library Journal
“Scheer examines how online convenience has supplanted bedrock American values of personal freedom and the right to privacy…Scheer provides more than enough solid journalism to show that the digital dirt is knee-deep and getting deeper. A vital piece of work that demands attention.” —Kirkus Reviews

Robert Scheer is the editor-in-chief of the Webby Award–winning online magazine Truthdig, professor at the University of Southern California’s Annenberg School for Communication and Journalism, and co-host of Left, Right & Center, a weekly syndicated radio show broadcast from NPR’s west coast affiliate, KCRW. In the 1960s, he was editor of the groundbreaking Ramparts magazine and later was national correspondent and columnist for the Los Angeles Times. He is the author of nine books, including The Great American Stickup.