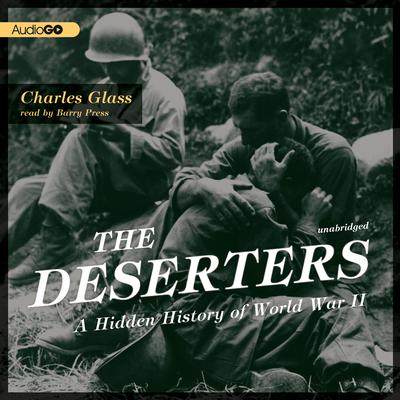 The Deserters: A Hidden History of World War II

A San Francisco Chronicle Best Book of 2013 in Nonfiction

An account that redefines the ordinary soldier in the Second World War, The Deserters is a breathtaking work of historical reportage, weaving together the lives of forgotten servicemen even as it overturns the assumptions and prejudices of an era. The Deserters reveals that ordinary soldiers viewed "desertion" as a natural part of conflict, as unexpected and inexplicable as bravery. Men who had fought fearlessly in the mountains of Italy were cowering wrecks a year later in the mountains of France; a man who fled from tanks in the desert showed superior courage in the D-Day amphibious landings. Many frontline soldiers saw no shame in these contradictory reactions and sought ways to comfort their comrades to fight another day.

With all the grace and pace of a novel, The Deserters moves beyond the false extremes of courage and cowardice to reveal the true experience of the Allied soldier. This is the story of men such as Private Alfred Whitehead, a Tennessee farm boy who earned Silver and Bronze Stars for bravery in Normandy—yet became a gangster in postliberation Paris, robbing Allied supply depots along with restaurants and ordinary citizens. It is the story of British soldiers such as Private John Bain, who deserted three times but fought well in North Africa and northern France until German machine-gun fire cut his legs from under him. The core of The Deserters resides with men such as Private Stephen Weiss, an idealistic boy from Brooklyn who enlisted at seventeen. On the Anzio beachhead and in the Ardennes forest, as an ordinary infantryman and an accidental partisan in the French Resistance, Weiss shed his illusions about the nobility of conflict and the infallibility of the American military.

Leading us through the moral twists and turns of The Deserters is Charles Glass, renowned journalist and author of the critically acclaimed Americans in Paris. Meticulously researched and deeply revelatory, The Deserters remains at its heart an unforgettable war story that, like the very best of the genre, deals with ordinary men struggling to fulfill the vast and contradictory expectations imposed upon them.

“The Deserters: A Hidden History of World War II, by the historian and former ABC News foreign correspondent Charles Glass, thus performs a service. It’s the first book to examine at length the sensitive topic of desertions during this war, and the facts it presents are frequently revealing and heartbreaking…The Deserters has much to say about soldiers’ hearts. It underscores the truth of the following observation, made by a World War II infantry captain named Charles B. MacDonald: ‘It is always an enriching experience to write about the American soldier in adversity no less than in glittering triumph.’” —New York Times
“By focusing on the stories of three deserters—two Americans, one Briton—Mr. Glass argues persuasively that deserters weren’t the cowards of popular assumption but rational men making a natural choice to stay alive…Mr. Glass has conscientiously trawled through court-martial records and US and British files, and he has spent many hours tape-recording interviews with deserters, but he has also been lucky enough to be allowed access to the unpublished memoirs of one deserter, Steve Weiss, as well as the correspondence of several others. Such material gives the author an intimate view into the mind of the wartime deserter.” —Wall Street Journal
“[The Deserters] does provide an intimate look at the whys and wherefores of three men who opted out of the front lines. At a time when the ravages of war in Iraq and Afghanistan have made the general public more aware than ever of the price too many soldiers pay for their service, that helps.” —Washington Post
“Powerful and often startling…The Deserters offers a provokingly fresh angle on this most studied of conflicts…This is a stripped down, unromanticized, intimate history of battle in all of its confusion, chaos, terror, and moral ambiguity. Intricately structured—the author deftly juggles three narrative strands—and beautifully paced to build suspense, this tightly focused account, which draws on memoirs, archives, police files, psychiatric records, is neither reverent nor disapproving.” —Boston Globe
“A veteran correspondent in war zones, Glass is richly credentialed to write The Deserters: A Hidden History of World War II. He is qualified by talent, by the good fortune of finding surviving veterans, and by exploring their lives with diligence and, most crucially, a deep compassion…Glass tells the soldiers’ stories with novelistic vividness and a good historian’s grasp of research detail.” —San Francisco Chronicle
“Sensitive and thought-provoking…As this compelling and well-researched book shows, the battlefield was not a place for heroes but a place where young men were dehumanized and killed…Given such conditions who among us would not also have considered walking away?” —Sunday Telegraph (London)
“Wonderful, unforgettable acts of witness, something salvaged from a time already sinking into the black mud of the past.” —Guardian (London)
“Gripping…painstaking…sympathetic…Glass reveals just how inglorious war really is.” —Times (London)
“Glass brings something new to the table by going deep with desertion, an overlooked aspect of the wartime experience. The result is an impressive achievement: a boot-level take on the conflict that is fresh without being cynically revisionist...[Glass] pulled off something special here: showing respect to what the deserters endured while acknowledging that the war—gruesome and unfair and nonsensical though it was—had to be won, and that this happened because enough men somehow found the will to keep going.” —New Republic
“Glass is to be commended for his take on WWII through the eyes of those who ran away from it...Glass’ history might be one of the best ways of relaying the experience of war: through the eyes of the young men who charged into the line of fire, gave up the ghost, and whose only reward was living to tell the tale.” —Publishers Weekly (starred review)

Charles Glass was the chief Middle East correspondent for ABC News from 1983 to 1993 and has covered wars in the Middle East, Africa, and the Balkans. His writings appear in Harper’s Magazine, the New York Review of Books, London Review of Books, the Independent, and the Spectator. He is the author of They Fought Alone, Tribes with Flags, The Tribes Triumphant, Money for Old Rope, The Northern Front, Americans in Paris: Life and Death Under Nazi Occupation, and The Deserters: A Hidden History of World War II.