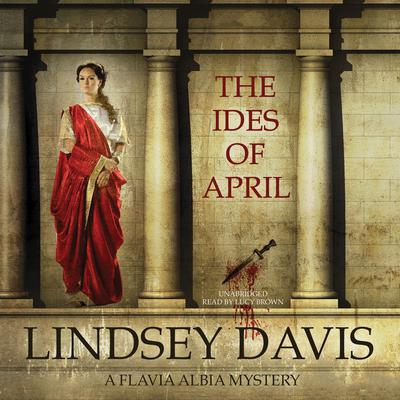 The Ides of April

Flavia Albia is the adopted daughter of Marcus Didius Falco and Helena Justina. From her mother, she learned how to blend in at all levels of society; from her father, she learned the tricks of their mutual professional trade. But her wits and (frequently) sharp tongue are hers alone.

Now, working as a private informer in Rome during the reign of Domitian, Flavia has taken over her father's old ramshackle digs at Fountain Court in the Surbura district, where she plies her trade with energy, determination, and the usual Falco luck. Recently hired to help investigate a fatal accident, she finds herself stuck with a truly awful person for a client and facing a well-heeled, well-connected opponent.

That is, until her client unexpectedly dies under what might be called "suspicious circumstances." While this is not a huge loss for society, it is a loss for Flavia Albia's pocket. Even worse, it's just one of a series of similar deaths for which she now finds herself under suspicion. Before things go from abysmal to worse, Flavia must sort out what is happening, and who is responsible.

“Davis delights once again with her trademark blend of quirky characters and rich period detail…Readers can anticipate Flavia Albia to be a compelling presence for years to come.” —Booklist (starred review)
“Davis ingeniously breathes life into her Ancient Rome series…by shifting the focus from Marcus Didius Falco to his adopted daughter, Flavia Albia…Flavia could have as long a literary run as Marcus.” —Publishers Weekly
“Davis combines excellent research, expansive knowledge, and vivid writing to immerse readers in ancient Rome. The people and places of the city seem both authentic and familiar…This series launch is a great read for mystery fans but is especially suggested for those who enjoy their crime fiction in a historical setting.” —Library Journal
“This is book one in a series which hopefully will go on for years. The story is narrated by Lucy Brown, who does a variety of characterizations…The novel is highly recommended.” —SoundCommentary.com

Lindsey Davis is an English novelist of historical fiction and best known for her award-winning historical crime stories set in ancient Rome and its empire, the acclaimed Marcus Didius Falco series and the Flavia Albia series. Her novels have won numerous awards, including the Crime Writers’ Association Ellis Peters Historical Dagger Award and in 2011 the Cartier Diamond Dagger from the Crime Writers Association for lifetime achievement. Born and raised in Birmingham, England, she read English at Oxford and worked for the civil service for thirteen years before becoming a writer.