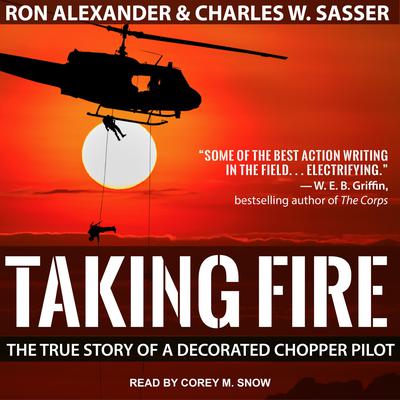 Taking Fire: The True Story of a Decorated Chopper Pilot

Nicknamed "Mini-Man" for his diminutive stature, a mere five-foot-three and 125 pounds in his flight boots, chopper pilot Ron Alexander proved to be a giant in the eyes of the men he rescued from the jungles and paddies of Vietnam. With an unswerving concern for every American soldier trapped by enemy fire, and a fearlessness that became legendary, Ron Alexander earned enough official praise to become the second most decorated helicopter pilot of the Vietnam era. Yet, for Ron, the real reward came from plucking his fellow soldiers from harm's way, giving them another chance to get home alive.

In Taking Fire, Alexander and acclaimed military writer Charles Sasser transport you right into the cramped cockpit of a Huey on patrol, offering a bird's eye view of the Vietnam conflict. Packed with riveting action and gritty "you-are-there" dialogue, this outstanding book celebrates the everyday heroism of the chopper pilots of Vietnam.