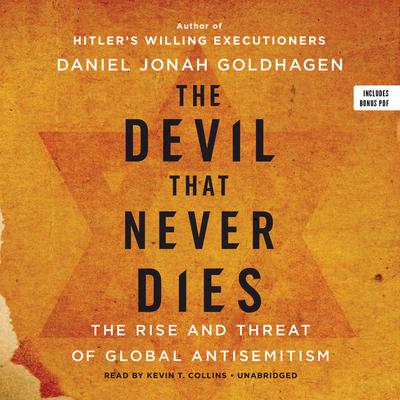 The Devil That Never Dies: The Rise and Threat of Global Anti-Semitism

Anti-Semitism never went away, but since the turn of the century it has multiplied beyond what anyone would have predicted. It is openly spread by intellectuals, politicians, and religious leaders in Europe, Asia, the Middle East, the United States, and Africa and supported by hundreds of millions more. Indeed, today anti-Semitism is stronger than any time since the Holocaust.

In The Devil That Never Dies, Daniel Jonah Goldhagen reveals the unprecedented, global form of this age-old hatred; its strategic use by states; its powerful appeal to individuals and groups; and how technology has fueled the flames that had been smoldering prior to the millennium.

A remarkable work of intellectual brilliance, moral stature, and urgent alarm, The Devil That Never Dies is destined to be one of the most provocative and talked-about books of the year.

“No other writer has held mass murderers, deniers of truth, and propagators of hate to a higher standard of moral accountability than Daniel Jonah Goldhagen....His latest, The Devil That Never Dies, doubtlessly will shatter the way people think about anti-Semitism—both in its past incarnations and present day existence…When the world’s man-made atrocities, moral failures, and blatant hypocrisies occur, he has proven himself time and again to be a righteous chronicler on behalf of the persecuted and the dead.” —Huffington Post
“A frightening exposition on how anti-Semitism has become a global phenomenon…Devil is bursting with information and insight.” —American Jewish World
“Goldhagen…seeks to focus attention on the danger posed by the tidal global spread of anti-Semitism and the increase in its volume and virulence in this century…Goldhagen substantiates his claim that anti-Semitism has taken over public discourse at a level exceeding that of the 1930s and 1940s.  He dispels the notion that this animus is caused by the actions of Israel or Jews and details the means used by anti-Semites to spread their influence—up to and including the agencies of the United Nations.” —Library Journal
“Former Harvard professor Goldhagen …comes out swinging in this frontal assault on anti-Semitism and its practitioners and does not pause for breath until the final page…Repeatedly he wonders: How can so few people generate such pervasive hostility? A frightening photograph of a mutable demon so many fail to recognize and continue to embrace.” —Kirkus Reviews