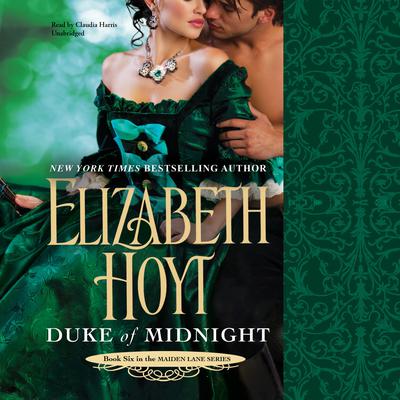 When a masked man …

Twenty years ago Maximus Batten witnessed the brutal murders of his parents. Now the autocratic Duke of Wakefield, he spends his days ruling Parliament. But by night, disguised as the Ghost of St. Giles, he prowls the city's grim alleys, ever on the hunt for the murderer. One night he finds a fiery woman who meets him toe-to-toe-and won't back down.

Artemis Greaves toils as a lady's companion, but hiding beneath the plain brown serge of her dress is the heart of a huntress. When the Ghost of St. Giles rescues her from footpads, she recognizes a kindred spirit and is intrigued. She's even more intrigued when she realizes who exactly the notorious Ghost is by day.

Artemis makes a bold move: she demands that Maximus use his influence to free her imprisoned brother—or she will expose him as the Ghost. But blackmailing a powerful duke isn't without risks. Now that she has the tiger by the tail, can she withstand his ire … or the temptation of his embrace?

“There is enchantment in the Maiden Lane series, not just the fairy tales Hoyt infuses into the memorable romances, but the wonder of love combined with passion, unique plotlines and unforgettable characters.” —RT Book Reviews (4½ stars, Top Pick!)

Elizabeth Hoyt is the author of three critically acclaimed historical romance series. Her books have been finalists four times in Romance Writers of America’s prestigious RITA award contest, have won two Romantic Times Reviewer’s Choice Awards, and were nominated for a third. All of her books have received Top Pick reviews from RT Book Reviews magazine. Both Wicked Intentions and Notorious Pleasures received starred reviews from Publishers Weekly. Four of her books were voted into All About Romance’s (AAR’s) Top 100 Romances of All Time list and six were Desert Isle Keepers at AAR. Her books have been translated into twelve languages.