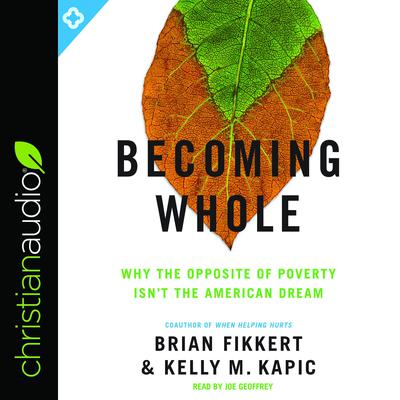 Becoming Whole: Why the Opposite of Poverty Isn't the American Dream

We are the richest people ever to walk the face of the earth, but according to research, we aren't becoming happier. Families and communities are increasingly fragmented, loneliness is skyrocketing, and physical and mental health are on the decline. Our unprecedented wealth doesn't seem to be doing us much good.

Yet, when we try to help poor people at home or abroad, our implicit assumption is that the goal is to help them to become like us. "If they would just do things our way, they'd be fine!" But even when they seem to pursue our path, they too find that the American Dream doesn't work for them. What if we have the wrong idea altogether? What if the goal isn't to turn other countries into the United States or to turn America's impoverished communities into its affluent suburbs?

In Becoming Whole (building on the bestselling When Helping Hurts), Brian Fikkert and Kelly M. Kapic look at the true sources of brokenness and poverty and uncover the surprising pathways to human flourishing, for poor and non-poor alike. Exposing the misconceptions of both Western Civilization and the Western church about the nature of God, human beings, and the world, they redefine success and offer new ways of achieving that success.

Dr. Brian Fikkert is a professor of economics and the founder and executive director of the Chalmers Center for Economic Development at Covenant College. He earned a PhD in economics from Yale University, specializing in international economics and economic development. He has been a consultant to the World Bank and is the author of numerous articles in both academic and popular journals. Prior to working at Covenant College, he was a professor at the University of Maryland and a research fellow at the Center for Institutional Reform and the Informal Sector.

KELLY M. KAPIC is professor of theological studies at Covenant College in Lookout Mountain, Georgia, where he has taught since 2001. He has written and edited numerous books, including Embodied Hope: A Theological Meditation on Pain and Suffering, which won the Book of the Year Award from Christianity Today in the category of Theology and Ethics.