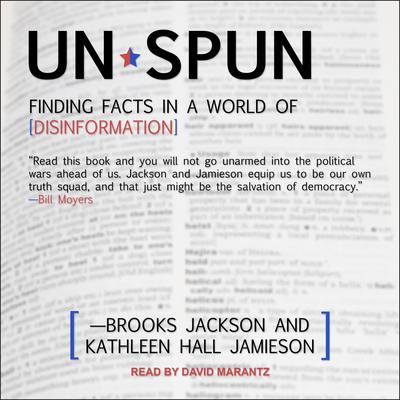 unSpun: Finding Facts in a World of Disinformation

The founders of FactCheck.org teach you how to identify and debunk spin, hype, and fake news in this essential guide to informed citizenship in an age of misinformation.

Americans are bombarded daily with mixed messages, half-truths, misleading statements, and out-and-out fabrications masquerading as facts. The news media is often too intimidated, too partisan, or too overworked to keep up with these deceptions.

unSpun is the secret decoder ring for the twenty-first-century world of disinformation. Written by Brooks Jackson and Kathleen Hall Jamieson, the founders of the acclaimed website FactCheck.org, unSpun reveals the secrets of separating facts from disinformation, such as:

● the warning signs of spin

● how to find trustworthy and objective sources of information

Telling fact from fiction shouldn't be a difficult task. With this book and a healthy dose of skepticism, anyone can cut through the haze of political deception and biased reportage to become a savvier, more responsible citizen.

Kathleen Hall Jamieson is Elizabeth Ware Packard Professor at Annenberg School for Communication of the University of Pennsylvania and director of its Annenberg Public Policy Center. She is the author of several widely acclaimed books on American politics and is herself a frequent media commentator on CBS News, Weekend Edition, and CNN’s Inside Politics. She lives in Philadelphia.

Brooks Jackson runs FactCheck.org and was previously an investigative reporter for the Associated Press, the Wall Street Journal, and CNN. He is the author of Honest Graft: Big Money and the American Political Process and Broken Promise: Why the Federal Election Commission Failed. Jackson lives in Washington, D.C.