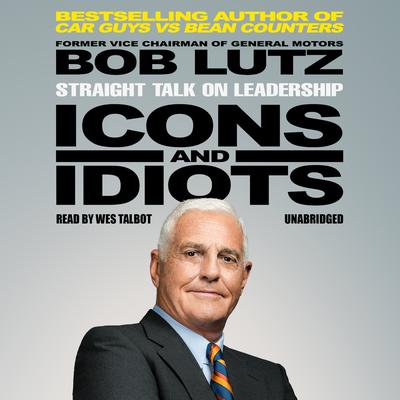 When Bob Lutz retired from General Motors in 2010 after an unparalleled forty-seven-year career in the auto industry, he was one of the most respected leaders in American business. He had survived all kinds of managers over those decades: tough and timid, analytical and irrational, charismatic and antisocial, and some who seemed to shift frequently among all those traits. His experiences made him an expert on leadership, every bit as much as he was an expert on cars and trucks.

Now Lutz is revealing the leaders—good, bad, and ugly—who made the strongest impression on him throughout his career. Icons and Idiots is a collection of shocking and often hilarious true stories and the lessons Lutz drew from them. From enduring the sadism of a Marine Corps drill instructor, to working with a washed-up alcoholic, to taking over the reins from a convicted felon, he reflects on the complexities of all-too-human leaders. No textbook or business school course can fully capture their idiosyncrasies, foibles, and weaknesses—which can make or break companies in the real world.

Lutz shows that we can learn just as much from the most stubborn, stupid, and corrupt leaders as we can from the inspiring geniuses. He offers fascinating profiles of icons and idiots such as

“A business primer that is as readable as it is instructive.” —Barnes & Noble, editorial review
“A fresh twist on leadership lessons…In concise, snappy, often hilarious chapters, Lutz profiles household names like Lee Iacocca and well-known CEOs like Bob Eaton…Lutz’s experiences in the auto industry will delight car lovers, but even the uninitiated will likely be amused by his lively prose. His vivid attention to detail brings each leader to life, illustrating his or her individual complexities with stories of foibles, political incorrectness, and praiseworthy moments that will draw sighs of recognition from readers who have worked in hierarchical corporations large or small.” —Publishers Weekly
“It seems to be the point of these entertaining, insightful behind-the-scenes tales of corporate culture that, while leadership can come in all kinds of quirky packages, the greatest benefit lies in the lasting impact it has on the people who work for him—or her.” —Booklist

Bob Lutz held senior leadership positions at General Motors, Ford, Chrysler, and BMW over nearly a half-century in the auto industry, culminating with his vice chairmanship of GM from 2001 to 2010. He is the bestselling author of Guts: 8 Laws of Business and Car Guys vs. Bean Counters: The Battle for the Soul of American Business. He lives outside Detroit.