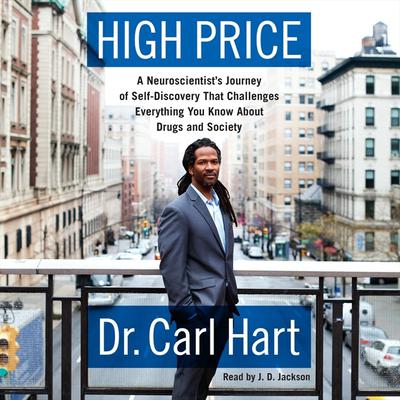 High Price: A Neuroscientist's Journey of Self-Discovery That Challenges Everything You Know About Drugs and Society

A pioneering neuroscientist shares his story of growing up in one of Miami's toughest neighborhoods and how it led him to his groundbreaking work in drug addiction.

As a youth, Carl Hart didn't realize the value of school; he studied just enough to stay on the basketball team. At the same time, he was immersed in street life. Today he is a cutting-edge neuroscientist—Columbia University's first tenured African American professor in the sciences—whose landmark, controversial research is redefining our understanding of addiction.

In this provocative and eye-opening memoir, he recalls his journey of self-discovery and weaves his past and present. Hart goes beyond the hype of the antidrug movement as he examines the relationship among drugs, pleasure, choice, and motivation, both in the brain and in society. His findings shed new light on common ideas about race, poverty, and drugs, and explain why current policies are failing.

Though Hart escaped neighborhoods that were dominated by entrenched poverty and the knot of problems associated with it, he has not turned his back on his roots. Determined to make a difference, he tirelessly applies his scientific research to help save real lives. But balancing his former street life with his achievements today has not been easy—a struggle he reflects on publicly for the first time.

A powerful story of hope and change, of a scientist who has dedicated his life to helping others, High Price will alter the way we think about poverty, race, and addiction—and how we can effect change.

“Carl Hart is a peerless contributor to America’s discourse on drug policy. He combines the rigor of a scientist with the street smarts of a former hustler. The result here is High Price, a fiercely uncompromising look at public health and an inspiring personal journey.” —Eugene Jarecki, award-winning author and documentary filmmaker
“A hard-hitting attack on current drug policy by…a neuroscientist who grew up on the streets of one of Miami’s toughest neighborhoods…An eye-opening, absorbing, complex story of scientific achievement in the face of overwhelming odds.” —Kirkus Reviews (starred review)
“Life stories are powerful tools in clarifying paths to success and failure and motivating people to envision and pursue their dreams. Dr. Hart shares in a deeply personal way his story of growing up in Miami and the apparently circuitous route he took to becoming a professor at an Ivy League university. In a unique and innovative approach, he recounts his child- and early adulthood as a black man growing up in America and his career as a substance-abuse research scientist in conjunction with telling the story of drug use and policy in America…High Price is highly edifying as we struggle to come to terms with our country’s perceptions of drug users and positions on drug laws and policies.” —Lula Beatty, former director, Special Populations Office, National Institute on Drug Abuse, National Institutes of Health; and senior director, Health Disparities, American Psychological Association

Carl Hart is an associate professor in the departments of Psychology and Psychiatry at Columbia University. He is also a research scientist in the Division of Substance Abuse at the New York State Psychiatric Institute. Dr. Hart is a member of the National Advisory Council on Drug Abuse and on the board of directors of the College on Problems of Drug Dependence and the Drug Policy Alliance. A native of Miami, Florida, Dr. Hart received his BS in psychology at the University of Maryland and his MS and PhD in experimental psychology and neuroscience at the University of Wyoming. He lives in New York City.